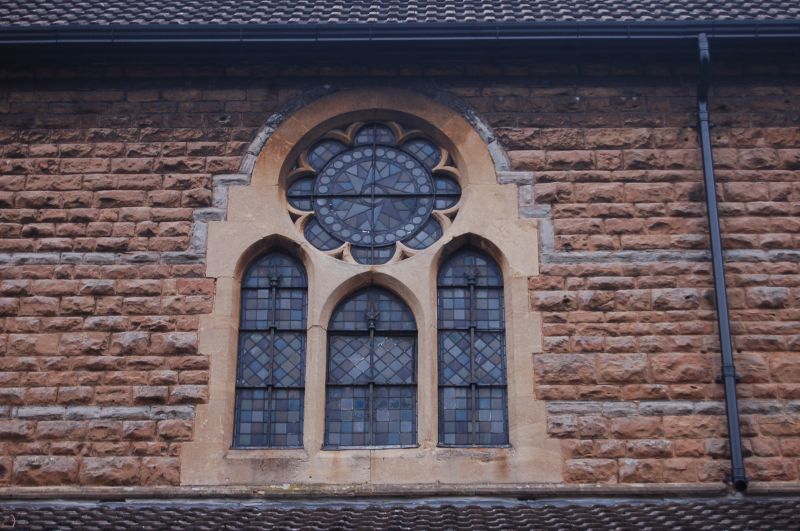 Parish church. 1879-80 by Goddard and Paget of Leicester. Rock
faced ashlar with ashlar dressings. Slate, concrete pantiles and
felt roofs. Single stack to vestry. Coped gables with single
ridge crosses to the west nave and east chancel. Buttressed apart
from the south aisle. Set on a chamfered plinth. North west
tower, nave, west porch, aisles, north vestry/organ chamber,
south chapel and chancel. Tower with saddle-back roof and 4
gargoyles with band extending between, of 3 stages with bands.
Further chamfered band over the plinth which extends to the north
aisle and north organ chamber forming a sill band. The west side
has a doorway with continuous hood mould over forming a sill band
to the single arched 2 light window with tracery to the left.
The band extends to the north tower. Above is a single lancet
with single clock face over. There are 3 circular stair lights.
The north side has a single window with 2 trefoil arched lights
and single cusped circle over. Above are 3 lancets, with single
lancet over. The east side has a single lancet with single clock
face over. Each side of the bell chamber has a single pair of
moulded arched openings, arches supported each side on 2 engaged
colonnettes with decorative capitals. Over, to the south and
north sides, are single lancets. The west nave has a lean-to
porch with parapet rising to a gable over the trefoil arched
entrance with moulded arch over and continuous hood mould. The
north and south walls each have single quatrefoils enclosed
within roundels. Inner moulded arched doorway with continuous
impost bands. Over the porch is a single arched 3 light window
with cusped tracery and continuous hood mould. In the apex is a
single small rectangular blind recessed panel. The north aisle
has 6 pairs of arched lights. In the clerestory are 3 windows
each with 3 arched lights surmounted by a single cusped circle.
To the left of the aisle is the organ chamber. In the east wall
is a single lancet. Further left and set back is the vestry with
chamfered band over the plinth which extends around the chancel
and chapel. Single pair of lancets in the east wall. The north
chancel has a single pair of tall lancets with continuous hood
mould which extends to the east chancel and chapel. The east
wall has a further band over the chamfered band, this extends to
the south chapel forming a hood mould over the doorway. East
chancel has 3 lancets, the single central lancet being taller.
The east chapel has a single window comprising 3 lancets. South
chapel has 2 pairs of lancets, to the left is a pointed chamfered
arched doorway with moulded arch over supported onsingle
colonnettes with moulded capitals. Further left is a single
similar pair of lancets. In the west apex is a single circular
light. The south aisle with chamfered sill band has 8 pairs of
lights as the north aisle with a single similar pair of lights in
the west wall. Clerestory with 4 windows as north clerestory.
All windows apart from the east chancel and east chapel have
flush ashlar quoin surrounds. Interior. 4 bay south nave and 3
bay north nave arcades with circular columns and responds and
moulded capitals and arches with hood moulds. Moulded nave/tower
arch with hood mould and screen, moulded north aisle/tower arch
with screen. Moulded chancel arch, the inner order supported on
sections of 3 engaged colonnettes with decorative capitals, in
turn supported on corbels. Continuous impost bands. Over are 3
lancets, the single central lancet being taller. Moulded north
aisle/organ chamber arch. Moulded south aisle/south chapel arch
with screen. Chancel/south chapel 3 bay arcade. Moulded arches
are supported on quatrefoil piers and responds with moulded
capitals. Each arcade is sub-divided by a single colonnette with
moulded capital supporting 2 trefoil arched openings with single
open trefoils over. Moulded arched doorway to vestry. All nave
and aisle windows apart from the west nave with continuous sill
bands. West entrance with inner wood and glass porch. C19 and
C20 furniture with ashlar pulpit and octagonal font decorated
with blind traceried panels. To the right of the chancel arch is
a brass plaque to Anne Ballard, 1626, this is decorated with an
incised figure in contemporary dress flanked by single shields.
Some C19 monuments. Single stained glass windows in south wall
of south aisle by H. Hughes, 1875 and Guthrie, 1893.