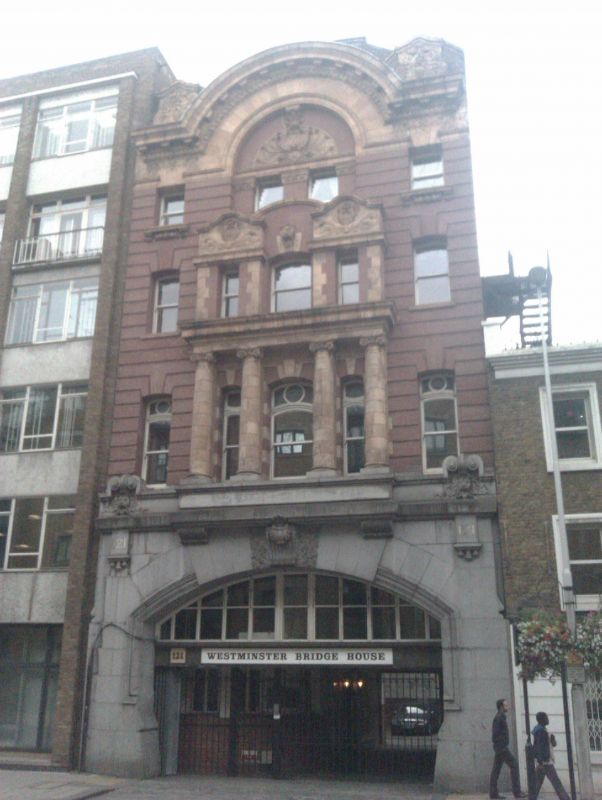 Former office block of the London Necropolis Company Terminus. Dated 1900. By
Cyril B Tubbs, general manager of the Necropolis Company, and Mr Andrews,
engineer, of the London and South-West Railway. Brick, with granite base to
the street facade, terracotta detailing and slate roof. Four storeys with a
fifth in the mansard roof; mezzanine inserted in second half of C20. The
ground floor consists of a massive segmental arch in grey granite with moulded
chamfering and an elaborately carved keystone, under a fascia said to be
inscribed 'LONDON NECROPOLIS'. The first, second and third floors are faced
with rusticated brickwork; the central windows of the first and second floors
are framed by a centrepiece consisting, on the first floor, of four engaged
columns and entablature, in terracotta and, on the second floor of two pairs of
square columns each consisting of brickwork and terracotta quoins, and each
pair supporting a 'stilted' pediment decorated with a cartouche and fronds of
Art Nouveau ornament. The third floor is topped by a massive semicircular
pediment, elaborately detailed in terracotta, and embracing the whole width of
the facade. A semicircular panel of ornament in the tympanum bears the date
'1900'. Interior: Architraves of original design survive round the doors and
windows on the first and second floors.
This building originally formed the street frontage for the London Necropolis
Company's Terminus; the other buildings, which extended to the south and west
as far as Newnham Terrace, have been demolished in the 1940s.
J M Clarke, The Brookwood Necropolis Railway, 1988.