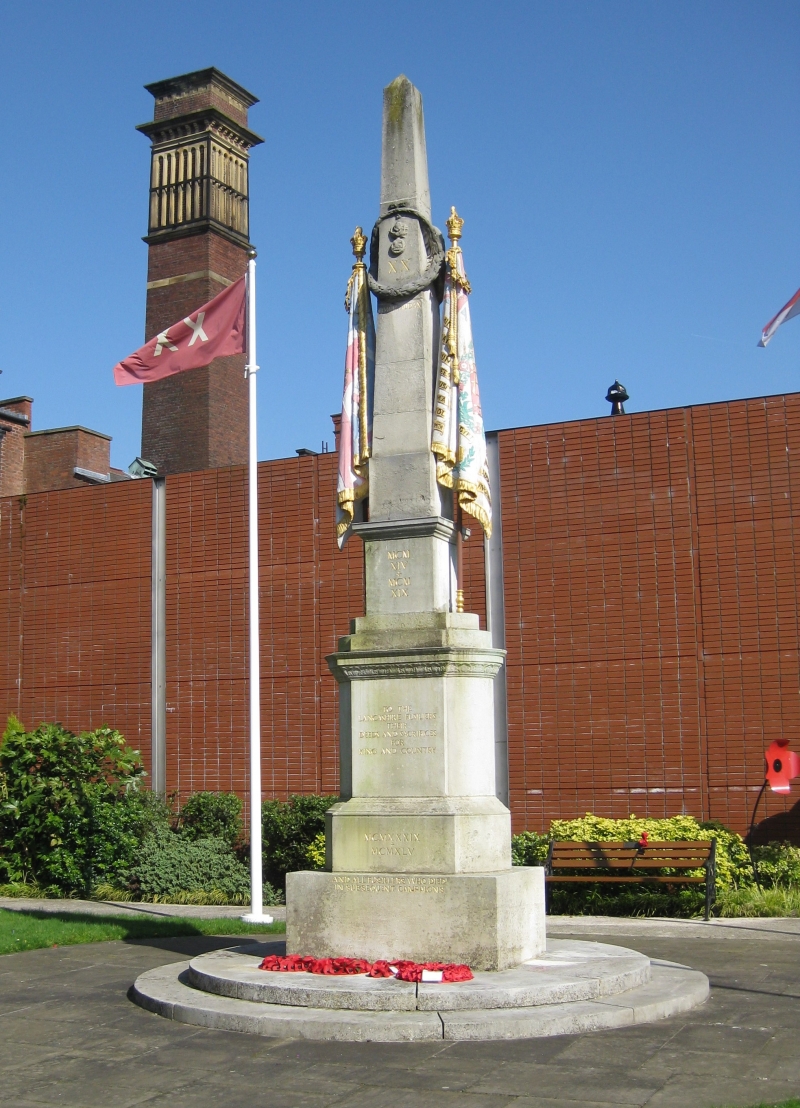 DESCRIPTION: The war memorial consists of a tapered obelisk approximately 4m tall with a square base incorporating a moulded cornice. The overall height is 6.9m. The obelisk is set upon a rectangular pedestal with convex east and west ends that incorporates a carved frieze and moulded cornice to the upper part, and which is itself set upon a rectangular plinth. The whole memorial is set upon two shallow circular steps.

The front (west) and rear (east) faces of the obelisk incorporate carvings of the regimental badge and the inscription XX in gilded lettering encircled by a wreath. Immediately beneath the wreath on the obelisk's west side is the inscription OMNIA AUDAX. Flanking the obelisk are life-sized regimental flags executed in painted stone; that to the north side represents the King's Colour, that to the south side represents the 1st Battalion Lancashire Fusiliers' Colour.

The war memorial to the Lancashire Fusiliers (formerly the 20th Foot Regiment), located in Gallipoli Gardens, Bury, was designed by the architect Sir Edwin Landseer Lutyens (1869-1944) and made by John Tinline, a local firm of stonemasons.

The Lancashire Fusiliers suffered notably heavy losses in the Gallipoli campaign of 1915-16 when a large allied force landed in the Dardanelles intending to take Constantinople from the Turks. In a ten-month stalemate, over 1,800 Fusiliers were killed. This included 600 of the 1,000 men who came ashore on ‘W’ Beach in the initial landing, in the course of which the Regiment was awarded six Victoria Crosses (‘the Six VCs before breakfast’).

Lutyens, whose father and uncle had both been members of the regiment, gave his services without fee. The memorial was unveiled on 25 April 1922 (the seventh anniversary of the Gallipoli landing) by Lieutenant General Sir H De Beauvoir De Lisle.

The memorial was intended to commemorate all 13,642 Lancashire Fusilier casualties of the First World War, and was later adapted to commemorate the regiment’s Second World War loses. In 1968 it was adopted by the Royal Regiment of Fusiliers to be the Regimental Memorial in Lancashire, and commemorates all Fusiliers who have died in service since that time.

The memorial was originally located outside the entrance of the Wellington Barracks on Bolton Road, Bury. However, the barracks were largely demolished during the 1970s and the memorial's location was adjusted slightly in response to this. The Fusilier Museum remained at the Bolton Road site until 2009 when it moved to a new location in the Grade II-listed former Arts & Crafts Centre, overlooking the junction of Silver Street and Moss Street. The war memorial was dismantled, repaired, restored and re-erected at the same time within Gallipoli Gardens (formerly known as Sparrow Park) adjacent to the newly re-located museum.

The war memorial to the Lancashire Fusiliers in Gallipoli Gardens, Silver Street, Bury, is listed at Grade II* for the following principal reasons:
* Commemorative: as an eloquent witness to the tragic impacts of world events on this community, and the sacrifices it made in the conflicts of the C20;
* Historic interest: for its strong cultural and historic significance, notably as a reminder of the heavy losses of Bury men who served in the Lancashire Fusiliers in the Gallipoli campaign;
* Architect: it was designed by the nationally renowned architect, Sir Edwin Landseer Lutyens (1869-1944), who had a personal connection to the Lancashire Fusiliers regiment through his father and uncle;
* Design quality: it has a simple yet elegant obelisk design incorporating carved decoration and two life-sized, heavily detailed, painted stone flags representing the colours of the king and the regiment.
* Group value: with the Bury School of Arts and Crafts, and the Art Gallery and Library, both Grade II-listed.