A Grade I Listed Building in Claydon, Suffolk 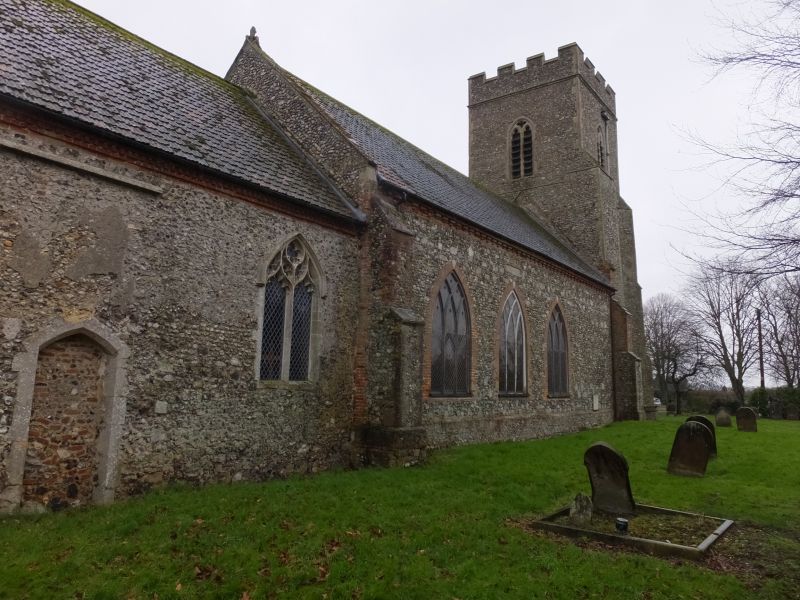 CLAYDON CHURCH LANE
TM 14 NW
7/99 Church of St. Peter
9.12.55
I
Redundant parish church; mediaeval, with major alterations in the Decorated
Gothic style, 1852, by R.M. Phipson for Revd. G. Drury. The original building
consists of nave, chancel, west tower and north porch. The alterations
include virtual rebuilding of most chancel and vestry, and addition of
transepts and organ chambers. Flint walls, mainly rendered, with limestone
dressings; the rubble includes some moulded ashlar sections. At both west
corners of the nave are exposed long-and-short quoins of C10 or C11. The C19
work is in uncoursed small flints. Plaintiled roofs with crested ridge tiles
and parapet gables. Nave wallings probably has C11/C12 core including semi-
circular rear-arch in south doorway. The east wall of the chancel and short
return sections, have some early C14 work including east window. Tower added
in C15, with some good detailing. The battlemented parapets have 7 original
limestone statues (an 8th is missing). Flushwork panelled buttresses;
traceried west window and door beneath. The tower retains its ringing floor,
internal stair with original door, and single bell. North and south moulded
nave doorways of C15; at the north is the original door. North and south C15
nave windows, the latter restored. C15 north porch; the doorway is complete
but blocked, but parapets and square side windows badly decayed. The fabric
of the C15 alterations, including tower, makes much use of concealed red
brick. Late C15 nave roof in 3 bays of collar-beam trusses, the collar braces
springing from shafts with moulded capitals; deep moulded cornice. Good
octagonal limestone font of c.1400, with a sunk panelled stem and well-carved
crowns, shields and heads. The C19 work includes richly-carved stonework,
e.g. foliate corbels from which spring the crossing arches, and the piercea
traceried pulpit. The chancel roof has heavy arch-braced principals, and the
transept roofs are canted, boarded and ribbed with bosses (these and other
joinery by Henry Ringham). Some stained glass figures in the C13 manner in
the east window are believed made by Revd. Drury himself. Later C19 stained
glass in several windows. The vestry, although mainly C19 work, seems to have
a mediaeval cornice, also possibly some flint walling. In the chancel are 2
C18 floor slabs.