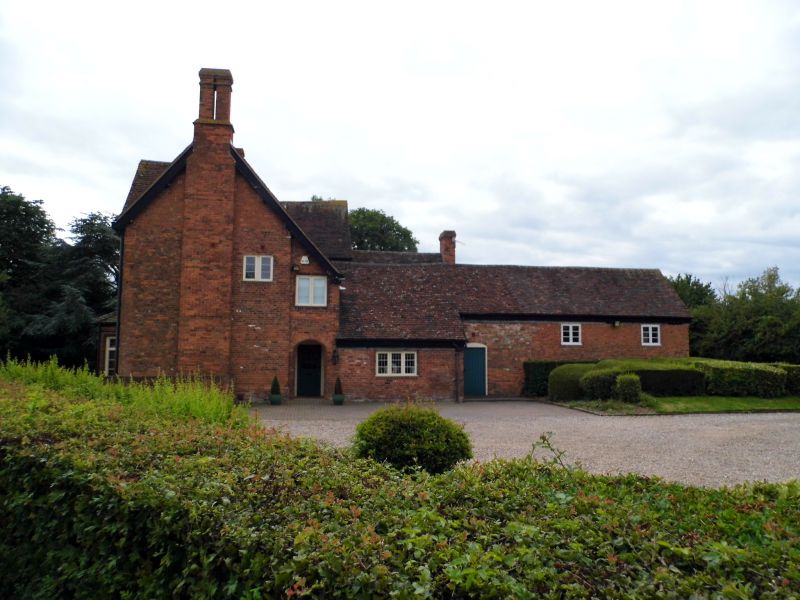 Church of England Parish: The baptist

House, formerly a farmhouse. Circa late C16 and C17; remodelled circa 1840. Red
brick in Flemish and English bonds and timber-framed. Plain clay tile roof with
gable ends and gabled at front. Brick gable-end and axial stacks. PLAN: The main
range is a circa 1840 remodelling of a C17 house with a stair-tower to the rear of
the left-hand end; adjoining the back of the stair-tower there is an earlier C17 or
late C16 timber-framed wing, which became the kitchen wing to the 1840 house.
The remodelled front range has a plan with three rooms at the front and a side
entrance porch to an axial corridor behind the three rooms; as well as the earlier
kitchen wing there is a long circa C17/18 outbuilding attached to the back of the
right-hand end. The circa 1840 remodelling is in Tudor style.

EXTERIOR: 2 storeys and tall attic. Symmetrical 3-bay east front with three gables
with bargeboards and pendants; chamfered brick window openings with C19 3-light
casements with glazing bars, the ground floor with transoms and in projecting bays
to left and right. The left [south] return has C19 gabled brick porch and earlier
wing to left with 5-light casement with cambered brick arch and smaller 4-light
window above. Timber-framing in the gable of the stair-tower at the rear to the
right; on the left a long brick outbuilding wing with timber-framing in gable-end.

NOTE: Clerkenleap was the seat of the Winslows; Edward Winslow sailed in the
Mayflower in 1620 and became Governor of Plymouth Colony. Clerkenleap was
also the birthplace of Treadway Russell Nash [1725-1811], the historian and author of
'Collections for the History of Worcestershire', and editor of Samuel Butler's 'Hudibras'.
SOURCE: Victoria County History.