Church of St Edward the Confessor 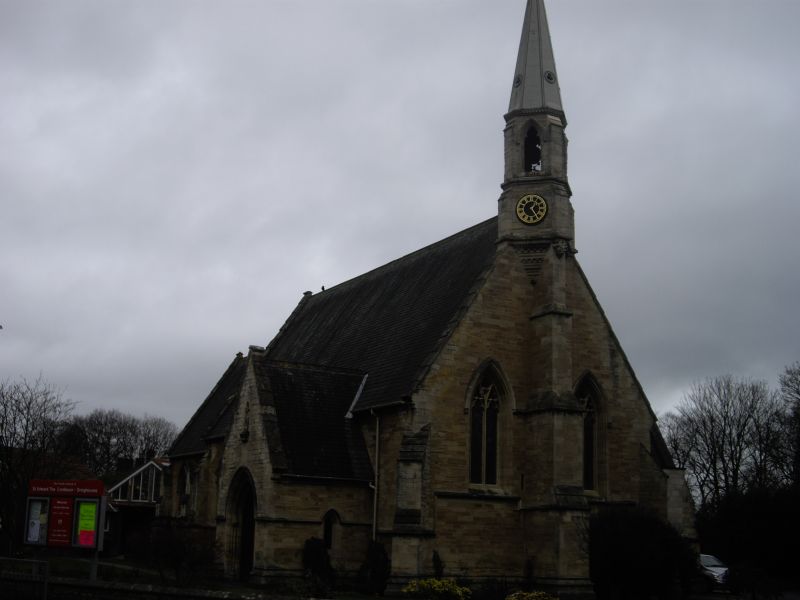 Location: Dringhouses and Woodthorpe, York, YO24

Parish church. 1847-9 by Vickers and Hugall of Pontefract.
Vestry enlarged 1902, and spire renewed 1970.
MATERIALS: squared limestone, with green slate roofs.
Fibreglass spire.
PLAN: the church has an aisleless nave, west bell turret,
north porch, lower chancel, and south-east vestry.
EXTERIOR: the west wall has diagonal buttresses, and a central
buttress reducing in 4 stages. To each side there is a moulded
pointed window of 2 lights with Geometrical tracery. At the
apex of the gable there is a 4-sided bell turret, set
diagonally and carried on moulded corbelling. Its lowest stage
has a clock face facing north-west, and the bell openings are
pointed and cusped. The spire is of fibreglass imitating
ashlar. The south wall of the nave is of 4 bays separated by
buttresses. The windows are moulded and pointed and have
Geometrical tracery. Except for the western window, which is
of one light, they are of 2 lights. The north wall of the nave
has 2 similar windows. The gabled porch has a moulded pointed
doorway with angle shafts which have foliated caps, and with
C20 glazed doors. Below the apex of the gable there is a niche
with a statue of St Edward the Confessor. The north wall of
the chancel has two 2-light windows with more elaborate
mouldings which include ball flower decoration and with hood
moulds which have head stops. The east window of the chancel
is of 3 lights with Geometrical tracery and has ornamentation
which includes ball flower decoration and shafts with foliated
caps. The south wall of the vestry has windows with plain
pointed lights, of 2 lights to the left of the door and one to
the right. The east wall of the vestry has a flat head and 2
trefoiled ogee lights.
INTERIOR: not inspected. RCHM record the interior as painted
and gilded, with painted texts and inscribed scrolls in
relief: Minton tiled floor. Nave roof supported on demi-angel
holding shields.
FITTINGS: include octagonal stone pulpit and font, wooden pews
and carved choir stalls.
The stained glass was designed for the church by William
Wailes, 1849. Memorial window of 1932 to Mrs G Brierley by
Bewsey.
MONUMENTS: include: in Vestry, monument to Samuel Francis
Barlow, 1800, removed from earlier chapel: white on grey
marble with fluted base, moulded cornice, with draped urn on