War Memorial at the Church of St Edward the Confessor 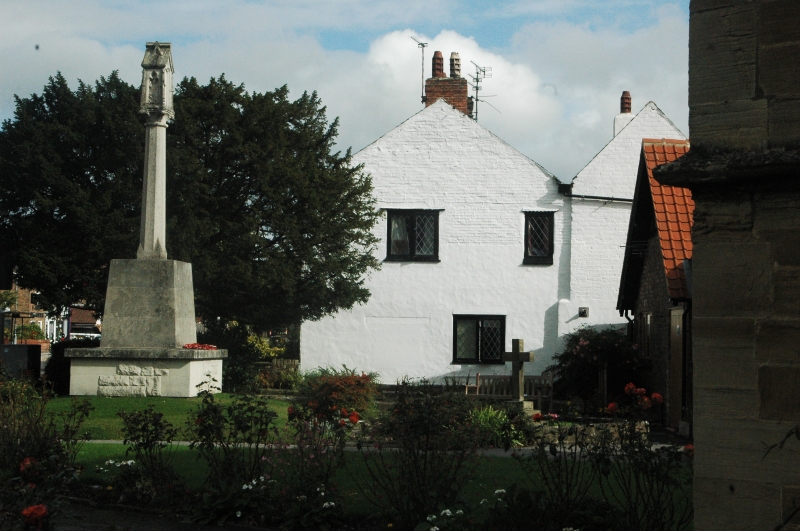 Entry Name: War Memorial at the Church of St Edward the Confessor

Location: Dringhouses and Woodthorpe, York, YO24

First World War memorial, 1922, by Brierley and Rutherford, with later additions for the Second World War.

DESCRIPTION: located within the churchyard of the Church of St Edward the Confessor, facing Tadcaster Road to the west, this is an elaborately carved lantern cross with a gabled canopy and pointed trefoil niches. The west facing niche contains a sculpture of the crucified Christ, the southern niche contains St George and the Dragon, the northern has a sculpture of St Edward the Confessor. The lantern is set on an octagonal shaft that rises from a four-sided, tapering plinth mounted on a square base of quarry-faced stone with finely dressed quoins and capping.

The plinth carries the inscriptions in incised lettering. The west side carries the principal inscription on inset panels and reads IN PROUD AND LOVING/ MEMORY OF THE MEN OF/ DRINGHOUSES WHO LAID/ DOWN THEIR LIVES FOR GOD/ AND COUNTRY IN THE GREAT/ WAR 1914 -1918. Below are the names of 29 men arranged in two columns in alphabetical order.

The Second World War inscription is more simply presented, inscribed on the south face 1939-45/ (6 NAMES)/ LEST WE FORGET.

The aftermath of the First World War saw the biggest single wave of public commemoration ever with tens of thousands of memorials erected across England. This was the result of both the huge impact on communities of the loss of three quarters of a million British lives, and also the official policy of not repatriating the dead which meant that the memorials provided the main focus of the grief felt at this great loss. One such memorial was raised in the grounds of the Church of St Edward the Confessor in York as a permanent testament to the sacrifice made by the members of the local community who lost their lives in the First World War.

The faculty license to erect a war memorial at the church was granted in April 1922. It was designed by the notable architect Walter Brierley who was also a church warden at the church, and was built by the masons George W Milburn and Son. The unveiling and dedication ceremony took place on 30 September 1922, attended by the Suffragan Bishop of Beverley and the Earl of Harwood. The memorial includes the names of 29 men who died in the First World War, with a further six names being added after the Second World War.

Walter Henry Brierley (1862-1926) was known as the Yorkshire Lutyens. He designed over 300 buildings between 1885 and 1926. These include the York board schools, a number of public buildings and a series of large houses including, Bishopsbarns (Grade II*) and Goddards (Grade I).

The war memorial situated in the churchyard of the Church of St Edward the Confessor, is listed at Grade II for the following principal reasons:

* as an eloquent witness to the tragic impact of world events on this local community, and the sacrifice it has made in the conflicts of the C20.

* a high quality design by the notable architect, Walter Brierley.

* with the adjacent church, 34 Tadcaster Road and the Cross Keys Hotel.