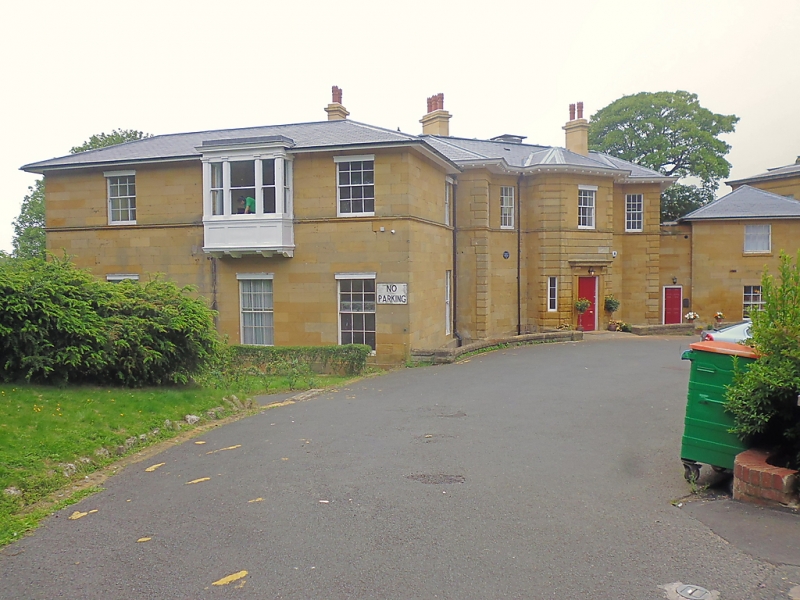 Entrance has projecting centre with bevelled rusticated corners, narrowed bays splay out at approximately 180 degrees. Low hipped slate roof with bracketed moulded overhanging eaves. Three windows to centre portion and one to each splayed bay, the centre window over door broader, glazing bar sashes. Door modern but in surround of panelled stone pilaster strips with console brackets to cornice over. Later wings in similar style of one and two storeys extend at same angle as end bays of main block. The north east return front of left hand wing has three windows with pilastered rectangular bay window on shaped brackets. The south east garden front is on similar splayed plan to that facing north but the centre has canted projection of, three windows with paired sashes flanking. The centre window of canted projection is flanked by Greek Key pattern panels and has heavy interlaced circle stone balcony on shaped brackets ever ground floor. French window flanked by panelled strips.

The house was the Scarborough villa of the first Earl of Londesborough who entertained Edward VII here in 1871, the footbridge over Vernon Road (qv) was the Londesborough's private access to the Spa Bridge and the Spa itself. Set in fine grounds down to the Valley.