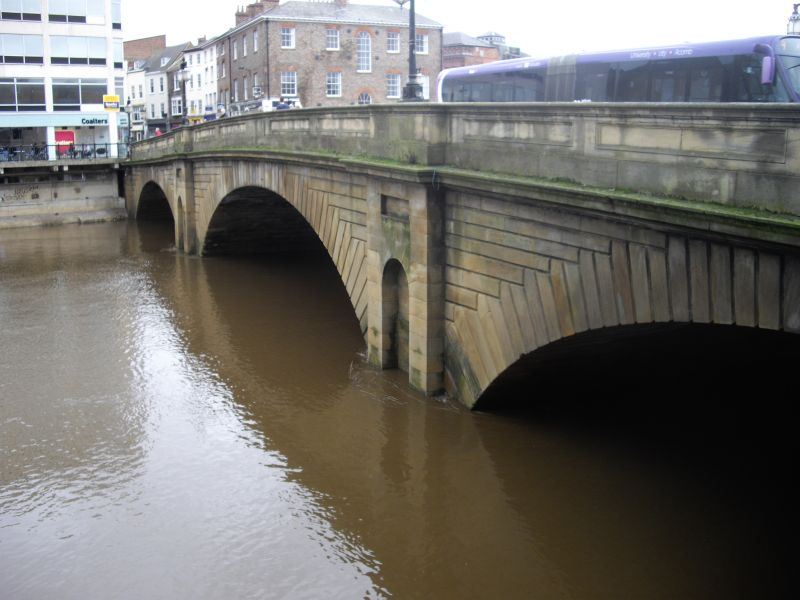 Bridge with flights of steps attached at each end on
downstream side. 1810-20, with early C20 lamp standards. By
Peter Atkinson junior. Limestone ashlar, rusticated; painted
cast-iron lamp standards.
3-span bridge, with segmental arches of rusticated voussoirs
between piers containing round-headed niches on half-octagonal
cutwaters. Moulded cornice beneath sunk-panelled parapet with
cambered coping. Piers rise into parapet to form plinths for
fluted tapering lamp standards, branching at top for pendant
lanterns, and with stylised flame finial. Similar flights of
steps on east and west banks are straight with plain parapets,
moulded cambered coping and cylindrical terminal piers with
moulded flat caps.
HISTORICAL NOTE: when the bridge foundation stone was laid a
brass plate was set in a cavity, inscribed:- "The First Stone
of This Bridge was laid December 10th in the Year MDCCCX and
in the reign of George the Third by the Rt. Hon. Geo. Peacock
Lord Mayor. Peter Atkinson Architect".
(City of York: South-west of the Ouse: HMSO: 1972-: 48-50).