The Bar Convent and Railings Attached to Front 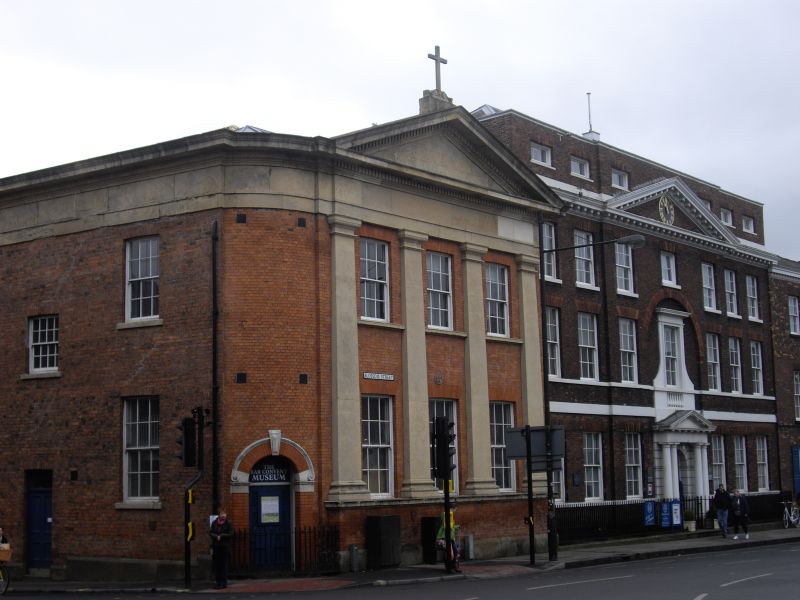 Entry Name: The Bar Convent and Railings Attached to Front

Convent and school of The Institute of the Blessed Virgin
Mary; now convent and museum. Entrance range of 1786-9,
fronting earlier buildings of which the Chapel block of 1766-9
remains relatively unaltered; 1790-3 outer range on north side
of Court added; 1834-5 inner range on north side of Court and
range north of the Chapel block added; 1844-6 Chapel block
altered and Schoolroom block on corner of Nunnery Lane added.
The Court was roofed c1865 and other alterations made later in
C19. Parts of the building were damaged during the Second
World War and some alterations were made during conversion for
museum use c1985. C18 buildings by Thomas Atkinson; work of
the 1830s by JB and W Atkinson, of 1840s and later by GT
Andrews.
MATERIALS: entrance range of red-brown brick in Flemish bond
with window arches of orange brick; plinth, dressings and
cornice of painted stone. 1834 range of buff brick in Flemish
bond with timber bracketed eaves guttering. Schoolroom block
of orange-brown brick, Blossom Street front in Flemish bond,
Nunnery Lane front in English garden-wall bond; window arches
are of orange brick; plinth and giant order with entablature
on Blossom Street front of ashlar. All roofs are hipped and
slated and have brick stacks except for lead roof to clock
tower and glass roof to Court. Stone gable cross.
EXTERIOR: entrance range: 3 storeys and attic; 7-bay front; 3
centre bays are pedimented and break forward slightly. Ground
and first floors in centre are treated as centrepiece and set
in 2-storey round-arched recess: moulded stone steps lead up
to 6-panel door in rusticated surround, with plain fanlight
behind decorative iron grille. Detached doorcase is of paired
fluted Doric columns supporting mutule cornice and pediment.
Window above is 12-pane sash in shouldered surround with
balustrade below window and moulded cornice above. All other
windows on ground, first and second floors are 12-pane sashes,
those on second floor squatter. On ground and first floors
they have sill band, on second floor painted stone sills: all
have flat arches of rubbed brick. Broad raised bands to first
floor and attic. Moulded cornice and pediment are modillioned
and pediment has clock face in tympanum. Plain attic has 6
squat 3-pane windows. Railings braced to ground floor and
forming gates across porch are of square section with tapered