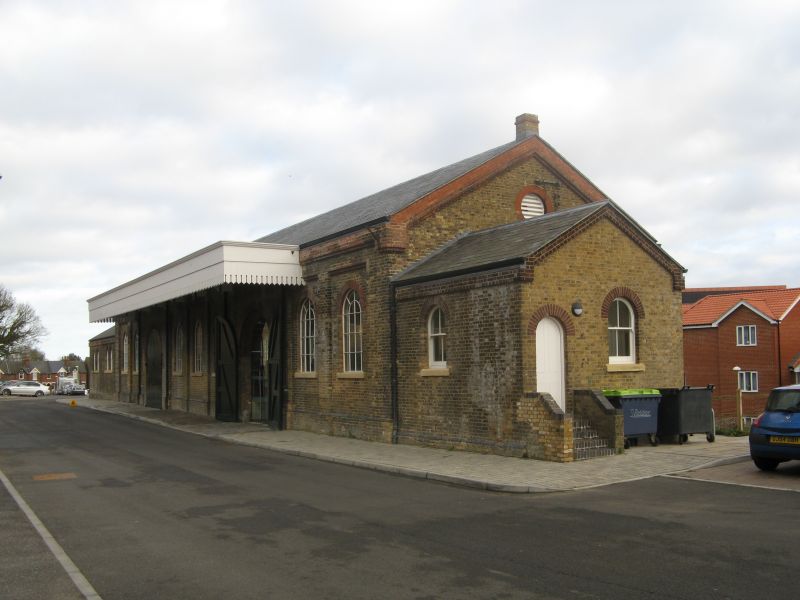 II
Former goods shed. Circa 1858, built for the East Kent Railway line. Built of stock brick with red brick dressings. Gabled slate roof.
PLAN: Rectangular structure of nine bays with smaller structures to north and south, the south structure probably originally a boiler house.
EXTERIOR: The front or west elevation has 7 round-headed windows with red brick arches divided by pilasters and two large round-headed openings retaining iron pintle hinges. The windows retain the iron glazing bars of the fixed casements although the glass was missing at the time of the inspection. Plinth. The full length wooden canopy was no longer present. The gable ends have brick coping and circular louvred ventilation holes and large round-headed entrances. A chimneystack on the ridge has been rebuilt. Attached to the south is a low gabled room with round-headed openings including an entrance with a flight of stone steps and solid brick balustrading. A similar but larger projection to the north, probably originally a boiler house, has two paired round-headed arches, similar coping to the gable and round-headed windows and entrance. The east side is similar with round-headed window openings but the casements have gone and there are no entrances
INTERIOR: Of nine bays with roof structure of queenposts and side angled queenstruts, two tiers of purlins and a ridgepiece which is boarded. The roof structure is supported on stepped brick lintels. A brick platform stretches halfway across the building to the west and the full length of the building and retains two fixed iron cranes, about 10 feet in height. The end gables each have a louvred oculus and a large round-headed opening for rolling stock. One half of a pair of round-headed doors, ledged and braced, remained within.

A circa 1858 former goods shed built for the East Kent Railway line, substantially intact and part of a good group of railway structures of similar age at Faversham.