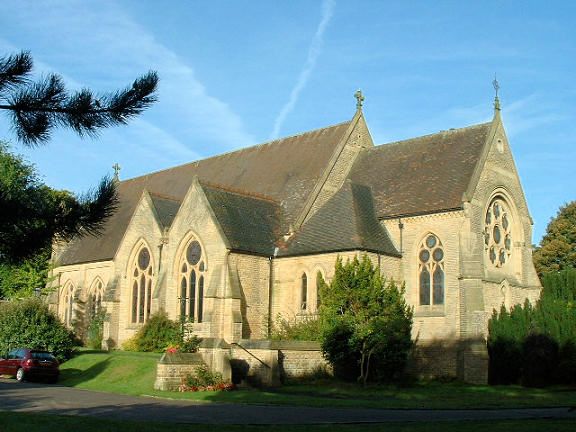 Church. 1864-68, by Alfred Waterhouse. Coursed sandstone
rubble, red tiled roof. Gothic style. Nave with double north
and south transepts, north porch, chancel with north vestry
(plus C20 additions to west end). The buttressed 6-bay nave
has large 2-centred arched 3-light windows with cusped lights
and large emphatic unfoiled circular tracery, linked by a
drip-band which carries round the buttresses; square corner
pinnacles; and a very large 6-light west window (the lower
part now concealed by additions at this end). The gabled porch
to the 1st bay on the north side has a cusped opening under a
2-centred arch with paired shafts; wrought-iron gates and
immediately inside these a panelled screen and door. The
transepts have large 3-light windows similar to those of the
nave but with spherical triangles over the outer lights, and
roofs with bands of green fishscale slates and red cockscomb
ridge tiles. The chancel has (inter alia) a large rose window
with circular tracery, a niche below this with the eagle
emblem of the Evangelist, and a band of raised lettering. The
porch to the north vestry has a moulded doorway with innner
lintel inscribed "LET THY PRIESTS BE CLOTHED WITH
RIGHTEOUSNESS". Interior: yellow brick with some polychromatic
patterning; steep open roof; one south nave window with
stained glass by Morris & Co., 1897 (Pevsner).

This building was formerly listed in the City of Manchester.