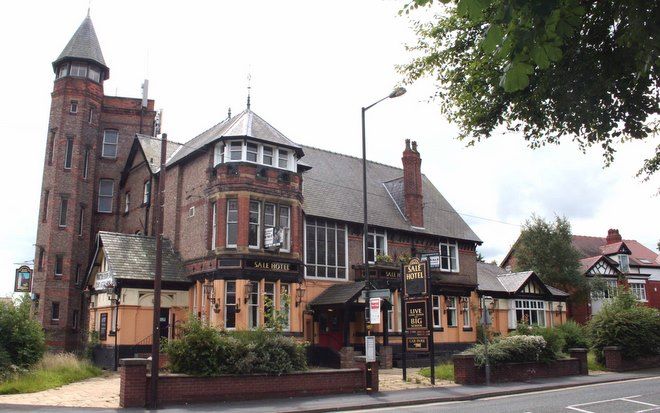 (Previously listed as: the Sale Hotel)

EXTERIOR: of two storeys with higher projecting bay to east; taller tower beyond that. Central entrance (altered) beneath large mullioned square staircase window; projecting bay to west, with a further three-light projection beyond that, replacing the original arched entrance. Casement windows above, set beneath overhanging eaves carried on with slender wooden brackets. The canted left-hand bay has triple windows with side-lights to the returns, set between stone cills and lintels; above the battlemented parapet is a low canted window set beneath overhanging eaves. To the east is a single-storey entrance beneath a slate roof, with half-timbering to the eastern face. Behind this is an octagonal tower, with narrow windows rising up the sides reflecting the stairs within; at the top is a continuous window beneath the steeply pitched slate roof. The tower is attached to a four storey block. The west return elevation is gabled and tile-hung, with a projecting penticed window at first floor level.

HISTORY: The Moorfield, formerly listed as the Sale Hotel, but originally known as the Moorfield Hotel, was opened in 1879 to designs by the practice of Lockwood, Smith and Heathcote, architects of London and Manchester. It was the centrepiece of a development by John and Marmaduke Witty of Manchester who had previously acquired the existing Sale Botanic Gardens and Pleasure Grounds which lay alongside. The Gardens and Pleasure Grounds, as was often the case, were short-lived and closed in 1896-7 and the land was subsequently developed for housing. This, the Moorfields estate, still exists and provides part of the historic context for the hotel. The hotel was modestly extended by the addition of a billiard room in 1905, an earlier billiard room having been contrived by filling an archway through the building. The hotel and pub was internally much altered in the 1960s when many of the Victorian fittings were removed.

REASONS FOR DESIGNATION: the Moorfield, built in 1878 to the designs of Lockwood, Smith & Heathcote, is designated at Grade II, for the following principal reasons:
Architectural: the hotel, designed by a significant architectural practice, is a carefully composed design in the Old English manner, then becoming a very fashionable approach. The tower is a particularly unusual feature.
Historical: this is a highly prominent building in the suburban context which was associated with a now-vanished pleasure ground; as such, it is a significant embodiment of developments in High Victorian leisure
Rarity: it is a highly unusual survival of a building connected with a private pleasure ground, and a striking episode within its setting.