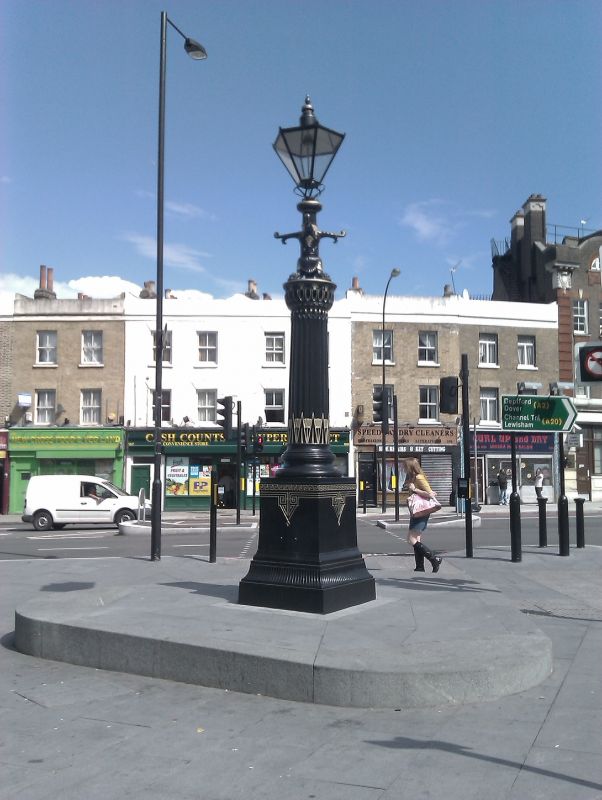 Ventilating pipe. Installed as part of public conveniences of 1897 by George Jennings, sanitary
engineer, for Greenwich District Board of Works on behalf of the Vestry of St Paul's, Deptford.
Central ventilating column of Egyptian pattern by Macfarlane's Castings of Glasgow and modelled
on a design by Alexander'Greek'Thomson for six lampstandards outside his Egyptian Halls, these
were erected without authority and were demolished in 1871. This is one of only two known
examples of the design, the other is in Clifton Rise, New Cross, but is not on its original site. The
ventilating pipe served as an extract for foul gases from the lavatories below, which could be burnt
offby the gas mantle at the top.
The cast-iron ventilation shaft alone is listed for the special interest of its design. Its Egyptian
pattern is most unusual, and it is special in its derivation from a model by a leading Scottish
architect, Alexander Thomson. The ventilation columns in New Cross are the only works
associated with Thomson in England.
Source:
Gavin Stamp, 'Greek T in London', in The Alexander Thomson Society Newsletter, No. 8,
October 1993.