A Grade I Listed Building in Huntwick with Foulby and Nostell, Wakefield 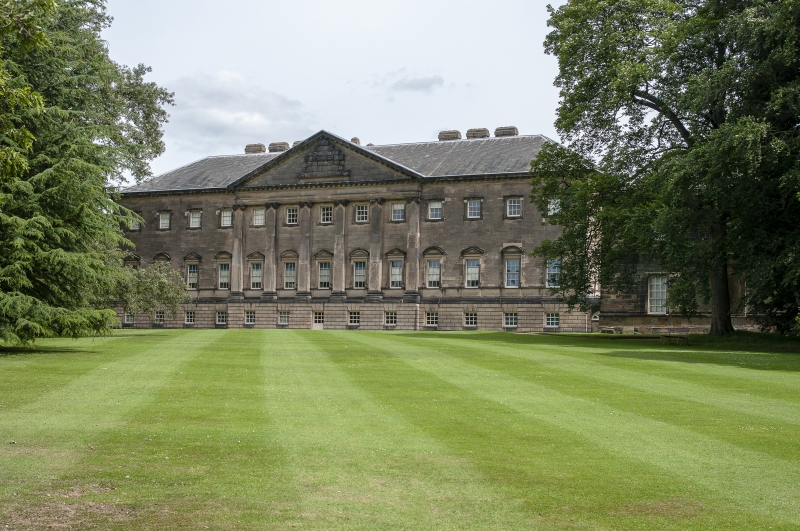 Country house. 1736-1750, for Sir Rowland Winn, 4th baronet, by James Paine,
probably from initial designs of Col. James Moyser (based on Palladio's Villa
Mocenigo); completed by Robert Adam, with some alterations, 1765-1776, and
with the addition of a north wing 1779-80, for Sir Rowland Winn, 5th baronet.
Sandstone ashlar, stone slate roof. Conceived as a rectangular central block
joined by quadrant wings to 4 square pavilions, of which only the southern
pair were built (and one of these subsequently demolished). The main block
is of double-pile circulatory plan. The east front, of 2 storeys raised over
a rustic basement, and l3 bays, is symmetrical; it has a 5-bay centre of
attached giant Ionic columns, with a plain entablature and a dentilled
pediment containing a large carved coat of arms (of the Winn family); on the
piano nobile level, a central doorway with architrave and pediment on
consoles, and 12-pane sashed windows which have similar architraves with
pediments alternately segmental, the windows linked by sill-bands; and at 1st
floor, square 9 pane windows with architraves, that in the centre eared. In
the centre of the rustic, which has similar windows, a 5-bay raised terrace,
added by Robert Adam, flanked by curving flights of steps, has a central
pedimented doorway (now the principal entrance), and 4 square 12-pane
windows, and a balustraded parapet carried down the steps on either side.
Dentilled cornice and hipped 2-span roof with 6 chimneys rising within the
valley (3 each side of the centre).The added north wing (known as the Family
Wing), has a set-back 3-bay linking range, a 5-bay main block with a
tetrastyle Ionic portico rising from the projected rustic, a blind oeil-de-
boeuf in the pediment, Ionic corner pilasters, a string course of guilloches
below the 1st floor windows, and a plain frieze, but otherwise matches the
main range. The 5-bay left return wall of the main Hall has in the centre
of the rustic a round-headed doorway with round-headed side windows, flanked
by coved niches, in the piano nobile above this, a Venetian window, and other
windows otherwise similar to those at the front except that the pediments are
all triangular and the architraves of those above have scrolls in the centre
of the heads and sills. The west front has giant Ionic pilasters to a 5-bay
pedimented centre breaking forwards slightly, a small doorway in the centre
of the rustic, and windows matching those in the front. The Kitchen
pavilion, to the south west, is square in plan, 3 x 3 bays, of 2 storeys over
a basement, with attic, and symmetrical in each facade: except for the east
side (attached to the quadrant passage),each has a central coved niche with
pedimented architrave, 15-pane sashes at ground floor and 9-pane sashes
above, all with raised surrounds; and a pyramidal roof with a pedimented
dormer in the centre of each side, and a large square apex chimney.
Interior:Rococo design, decoration and furnishing of major importance, by
James Paine and subsequently by Robert Adam, with plaster by Joseph Rose,
painting by Antonio Zucchi, furnishings and some decoration by Thomas
Chippendale: the earlier work, by Paine, mainly in the North and South
Staircases, and rooms to the south of the Hall (of which the Dining Room,
State Bedchamber and State Dressing Room are of principal interest); the
later work, by Adam, in the Top Hall and rooms to the north (principally the
Saloon, the Tapestry Room and the Library).
References: National Trust Nostell Priory (1985); Derek Linstrum West
Yorkshire Architects and Architecture (1978).