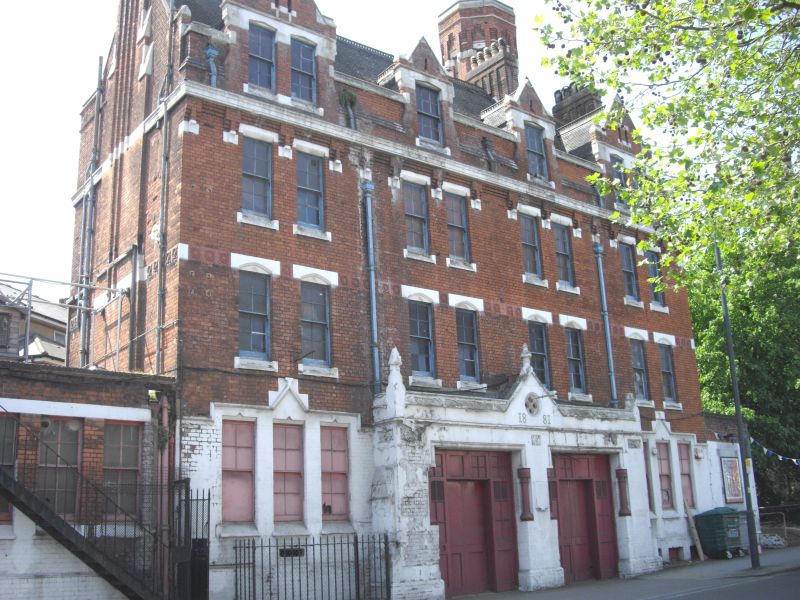 Theatre centre, formerly fire station. Built in 1881 and designed by the Metropolitan
Board of Works Architect's Department, probably by Robert Pearsall in Gothic style.
Red brick in Flemish bond and tiled roof. 3 storeys and attics 8 windows. 4 tall ribbed
brick chimneystacks. Attic storey has 4 gables with stone kneelers with 2 paired 8 pane
sashes to ends and 2 single 8 pane sashes to centre. Stone band below with corbels.
2nd floor has 8 8-pane sashes. 1st floor has 8 similar sashes with arched lintels
interrupting moulded terracotta band. Ground floor has triple 8-pane windows on each
side under drip mould. Centre has projecting porch with gable surmounted by finial in
centre and finials at sides and 2 wide doors below with 4 colonnettes inserted in sides.
The principal feature of the building is a tall octagonal watch tower at the right side of
the building with corbelling and lancet windows. Interior has wooden staircase with
stick balusters. In 1913 this fire station housed a station officer, nine firemen, two
coachmen, 2 pairs of horses, one horsed fire engine, one horsed escape, one manual
escape and one hose cart. Shortly afterwards it became redundant, being replaced by
the station further north in Norwood Road.