A Grade I Listed Building in Headland, Hartlepool 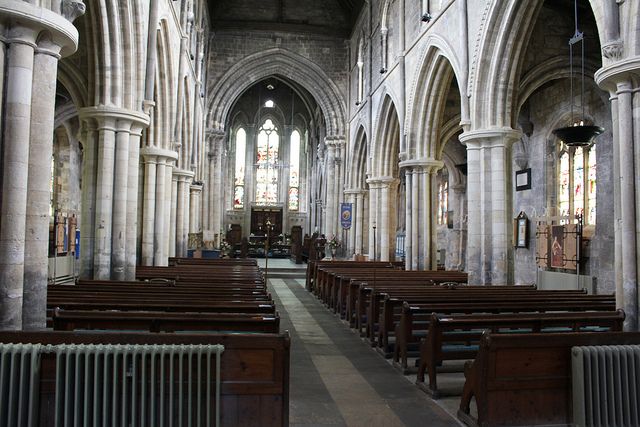 The nave internally consists of six bays with north and south aisles, the total width of the church at the west end being 44 ft. Like the quire, the nave is faced internally with wrought stone. The arcades differ in detail in many respects, and the dimensions of the bays vary, but the general effect is one of complete unity and harmony. The two arcades, though corresponding exactly in their dimensions, are not identical either in planning or decoration, the piers and the arch mouldings differing completely in detail. On the north side the piers are all alike, but on the south they differ from each other and from those opposite, while the arches have hood moulds on the south side only. At the east end of the south aisle was a chapel, the piscina of which remains in the south wall, and perhaps for this reason the east bay is wider than the others. The two western bays are much contracted, but the average width between the piers is about10 ft. 6 in. The first, third and fifth piers are square on plan with a keel-shaped shaft on each face. The second pier from the east is circular, with eight small circular shafts ranged around it, and the fourth is of similar type, but octagonal in plan. The shafts in each case have separate capitals and base, the former surmounted by a single large circular moulded abacus, from which the arches spring at a height of 12 ft. 3 in. above the floor. The arches are pointed and of two moulded orders with indented hoodmoulds similar to those in the quire, apparently indicating that the south arcade was built from east to west immediately after the chancel. A horizontal moulding runs the full length of the nave immediately above the arches, forming the sill of the clearstory windows, and over each pier, springing from a moulded corbel which rests on the abacus, rises a small circular shaft, with moulded capital, the full height of the wall. These shafts carried the ends of the principals of the old roof, which was of the same pitch as the existing modern one, and 'must have been of some trussed or arched form without tie-beams,' which would 'have cut across and disfigured the lofty arch in the tower.'

Uploaded by Antony Cairns
on 9 July 2011