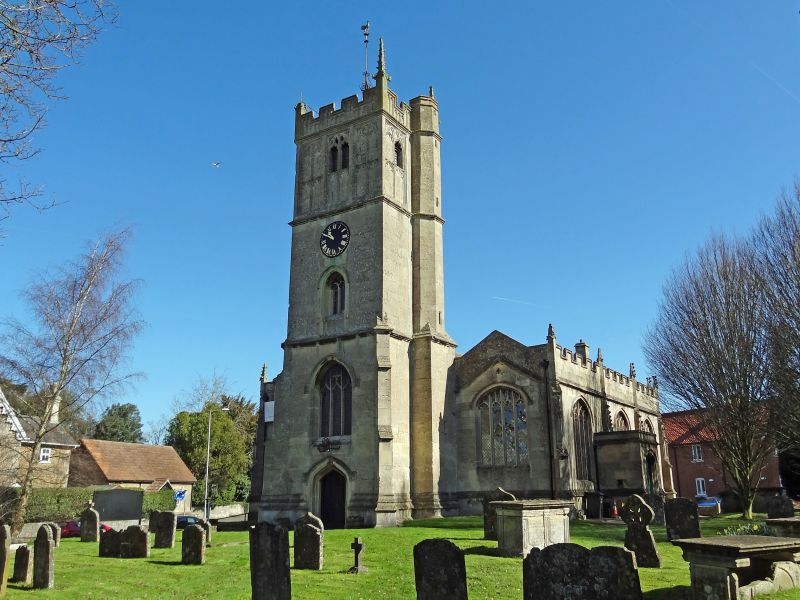 Materials: Coursed and dressed limestone. Slate roofs, with leading on the south vestry and south porch

Plan: West tower, short three-bay nave with west gallery, and wide aisles; the body of the church is almost square. The short chancel is constrained by Church Walk immediately to the east. There are low vestries in the returns east of the aisles (that at the north c. 1932-7). South porch, now a heating chamber.

Exterior: 15th century Perpendicular west tower, to a fine design of three stages with a moulded string at base of each stage. The base has diagonal buttresses, the upper stages are unbuttressed. The top stage has panelled tracery in triplets on each face, the centre panel only pierced as a bell-opening. The embattled parapet has blind arcaded panelling and corner pinnacles. Above the parapet rises a weathercock, on a tall rod with wrought iron supports. The body of the church was rebuilt in 1831-2. Competent and surprisingly accurate handling of Perpendicular Revival style for this date, which could be explained by copying, or even re-use, of old stonework. The aisles have four- and five-light windows under four-centred heads, pinnacles in relief on the buttresses, battlemented parapets with pinnacles on aisles and chancel.

Interior: The three-bay aisle arcades have piers of four shafts and four hollows on high plinths, and four-centred arches. The aisle walls have an irregular building break below the window cills, possibly indicating that the old walls were retained up to plinth level. However the medieval plan was not retained fully; the old north aisle was narrower than the south, and had fewer arcade piers. Shallow chancel. Inside the tower is a Perp tierceron star vault with large bell hole. The tall tower arch has two concave hollows with a rebate between. The ceilings are curved and plastered, with coved wall plates decorated with fleurons (all of 1832); panelled vault over the chancel. The interior was cleanly reordered in 2008: glazing below the gallery created a vestibule inside the main tower entrance and a meeting room in the west end of the north aisle. There is also a small room within the tower at gallery level. The gallery was refronted in glass and oak, and houses a resited organ console. The south aisle east end is furnished as the regimental chapel of the Wiltshire Regiment, based at Le Marchant Barracks nearby from c. 1878.

Subsidiary Features: The Church is a prominent feature of Devizes Green, particularly from the west with the large pond known as the Crammer in front. The big churchyard extends down to the water's edge.

History: A chapel of ease to Bishop Cannings may have been built in the late C14 or early C15 (it was certainly extant by 1461), possibly on the site of a hospital chapel which disappeared after 1338. It developed parochial status by the 16th century, and the dedication to St James was recorded in 1505. 19th century enlargement began in 1815 with an unexecuted design by Richard Ingleman for an enlarged chancel grafted onto the old nave and aisles, but eventually full rebuilding of the nave, aisles and chancel was agreed. Work began in July 1831, and the church re-opened on August 10, 1832. The architect was reportedly a 'Mr Pennistone', presumably John Peniston of Salisbury. However, Benoni White, a Devizes architect, seemingly drew the actual plans. (Colvin suggests that Benoni was the designer and Peniston took over after Benoni's death; however, Benoni died in July 1833, almost a year after rebuilding was complete. The split of responsibility for the design is unclear). A choir vestry was added in 1932-7, and the 1830s side galleries were removed c. 1937-46.

Reasons for Designation: The church of St James, Southbroom, Devizes is designated at Grade II* for the following principal reasons:

* A fine Perpendicular tower with triplet arrangement of traceried panels in the bell stage, reminiscent of some Somerset towers.

* Within the tower is an excellent medieval tierceron vault.

* The nave, aisles and chancel are in an unusually robust and accurate Gothic Revival style c. 1830, possibly incorporating parts of the medieval wall bases.

* It is integral to the religious and social history of Devizes, and makes an important contribution to the townscape, sited in a prominent position on a broad green next to a pond.