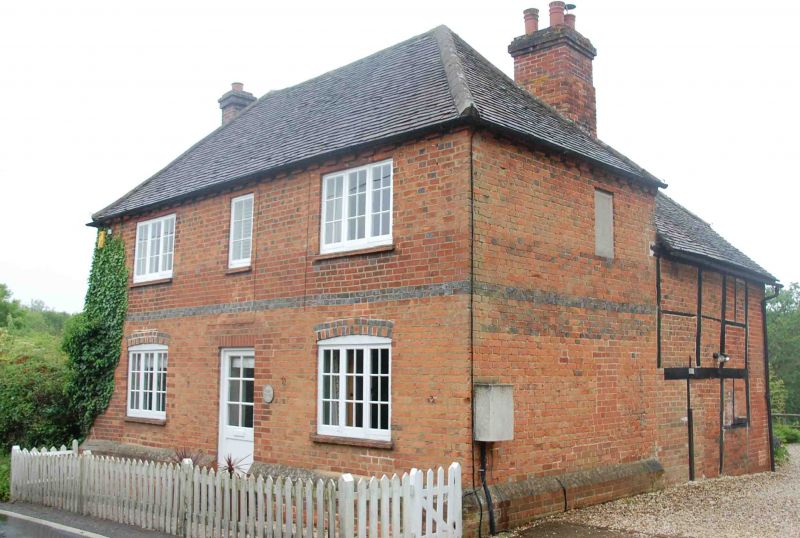 A detached two-storey cottage with a C17 bay and C18 façade, now flanked by C20 and C21 extensions.

MATERIALS: The cottage is built of red brick with blue brick banding and detailing, some timber framing and a tiled roof.

EXTERIOR: The C17 part of the building with timber framing is confined to one bay at the rear north side of the cottage. In front of this on the east are two bays and an entrance, added in the C18. This older core of the building is wrapped around on its south and part of its west side by modern extensions. The brickwork is Flemish bond with some patching to the north elevation where the walls are C17 and C18 in date. It has a hipped tiled roof, one axial chimney and one within the house avoiding the ridge. Windows and doors are all modern replacements.

The C18 front (east) elevation has a central doorway with modern casement windows and a band of blue brick between the ground and first floor. The position of a former porch can be seen as a gabled shadow mark above the door. There is a segmental arch of alternate blue and red brick above the ground floor windows and a soldier course above the door. The rear (west) elevation comprises the rear wall of the C17 cottage and the modern extension, the latter occupying most of the elevation southwards with a conservatory included. There is a gablet over the western elevation and a corresponding one over the modern extension. A hipped roof extension projects to the south. The C17, west bay has a wooden band at the junction of first floor and gable. There is a double modern casement with soldier course above on the ground floor of the C17 part and a single window above on the first floor. In the modern extension west extension there are two double windows on the ground floor and a triple above, all with soldier courses above. The rear door, northwards facing in the side of the modern extension, is now used as a main door. The north elevation has a patched wall in the C18 part of the building on the east with a blocked entrance on the ground floor and single window above on the first floor. The blue brick band continues onto this side of the house. The C17 part to the rear of this frontage shows the timber framing infilled with brick. The south elevation comprises virtually all modern extension apart from a small part of the C18 frontage. The roof has the hipped end of the rear part of the roof, a dormer window set into a catslide roof and the hipped roof of the porch.

INTERIOR: Inside, original stairs have been replaced by a re-positioned modern staircase. The three modern rooms on this south and west side have no features of special interest. The two rooms of the C18, east frontage of the house retain the following: in one one room there is a cross beam and a spine beam, both chamfered with stops, and a C18 fireplace opening; in the other room there is a chamfered cross beam and fireplace, which appears to be the outside of the original C17 stack, opened in the C18 to form a back-to-back fireplace. The C17 part of the house (north west) has chamfered spine beam and joists, all of which are original. The original fireplace in this room is of brick with a bread oven in one side of the fireplace and another opening in the opposite side. The bressumer appears to have been repositioned as it sits on freshly re-pointed brick supports. On the first floor the only room with features of interest is that above the dining room, in the C17 part of the building which retains two purlins a tie beam and parts of two braces, now plastered. The roof in the C17 part of the building has a mixture of old and modern rafters, and the roof of the C18 part has butt purlins and collars and appears to be intact.

HISTORY: The earliest part of Rose Cottage dates to the C17. It was improved in the C18 by the addition of a new brick facade and two bays to the front of the house. It appears to have then remained unchanged, being used as an agricultural worker's accommodation until the last quarter of the C20 when further changes took place with Listed Building Consent.

REASONS FOR DESIGNATION:
Rose Cottage is listed for the following principal reasons:
* The plan form of the C17 and C18 parts of the Cottage can be discerned.
* The Cottage retains a significant proportion of its C17 and C18 fabric.