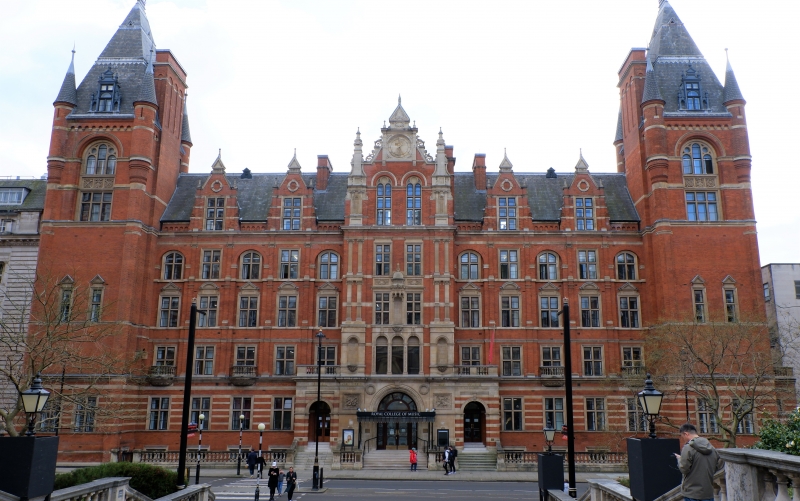 In the entry for:
TQ 2679 SE CITY OF WESTMINSTWER PRINCE CONSORT ROAD, SW7
94/4 (south side)
25.9.81 Royal College of Music
GV II
the description shall be amended to read as follows:
College. Designed 1889, built 1890-4 by Sir A W Blomfield; concert hall to rear 1899-1901 by
Sidney Smith. Red brick with stone banding on ground floor and dressings. throughout. Five
storeys with attics and double basements on steeply falling site. Symmetrical composition with
entrance vestibule and staircase hall on central axis with concert hall behind; former examination
rooms underneath this now sound studio. Main range with basement library, ground and first-floor
offices with practice rooms above. Main facade of twelve bays with towers to either end capped
pyramidal tops and tourelles. Central arched entrance with two subsidiary arched entrances
flanking. Two centre bays set forward above, with superimposed orders of paired pilasters in free
Ionic and Corinthian orders, and stone gable above with inset clock flanked by finials. Windows
mullioned and transomed, mainly square-headed except alternate segmental heads to third floor,
and those to towers and central gable which are semi-circular with cuspless tracery. Pediments to
second floor windows. Bands between floors and cornice above third floor. Elaborate gabled
dormers with pedimented tops and finials. Rear elevation with mullioned and transomed windows
under square heads, a plainer design.
Marble-lined entrance hall, double height with gallery and incorporating First World War
memorial. Ceiling here and in former ground-floor council room, now offices, of Jackson's patent
ornamental plasterwork. Elaborate doors to staircase hall, where imperial stair has simple iron
balustrade, which leads on axis to Smith's concert hall. This has barrel-vaulted roof with coffering
between trusses, which rest on massive modillion moulded cornice under square clerestorey
windows arranged in threes. Under this five-light round-arched mullioned and transomed
windows with floreate mouldings, their spandrels filled with reclining bas reliefs. Panelling below
dado rail. Large stage (extended later C20 and not special) with round-arches over entrances either
side of organ by J W Walker and contemporary with hall. Small balcony over entrances to rear,
with above that a round-arched internal window.
Most interiors of the main building retain original doors, cornices and mouldings. Of particular
interest is the former Donaldson Museum, now part of the library, in the lower basement, with
classical arcades - round-arched and with keystones - in the spandrels of which are paintings by
Gaston de Vaere. Trabeated ceiling with elaborate stenciled decoration. Moorish gallery. Also
impressive are the music rooms in the attic, with open timber trusses and dado panelling in
Blomfield's distinctive idiom; these undergoing careful restoration in 1994.
Source:
Survey of London, vol. 38, South Kensington, the Museums Area, 1975, pp.228-30.
-----------------------------------------------------------------