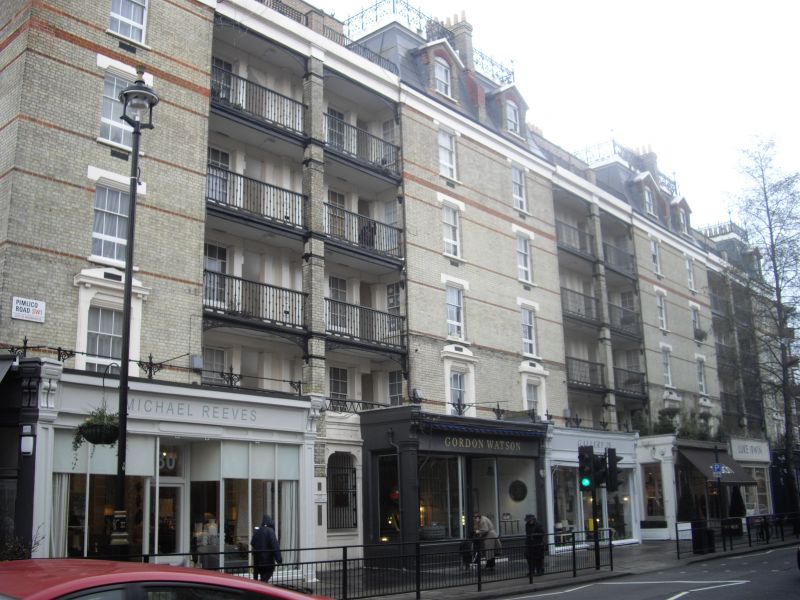 EXTERIOR: The building has five storeys and attic, and is 12 bays wide. The outer bays to each end, the fourth, fifth, eighth and ninth bays are set forward with square headed architraved sash windows, glazing bars and pedimental block courses to first floor. Intervening bays are recessed with access balconies with cast iron balustrades and spandrels. The French pavilion roofs have cast-iron cresting and gabled dormers. There are shops to the ground floor separated by stucco pilasters and access stairways.

HISTORY: The IIDC was founded in 1863 by Sydney Waterlow and was one of the early builders of public social housing in Britain. The IIDC was a commercial company which demonstrated that it was possible to build good quality housing which could be let to artisans at a sustainable rent, whilst offering a modest five percent profit for the owner. The company built a number of blocks of flats in London to designs adapted from the work of architect Henry Roberts (1803-1876). A design by Roberts, constructed at the Great Exhibition of 1851 as a prototype for public housing, provided flatted accommodation accessed from recessed balconies to the front, which were reached by open stairs. This design, which was capable of vertical and lateral expansion, was adopted by Waterlow and his builder Matthew Allen. The internal layouts however were designed by Waterlow and Allen themselves.

REASONS FOR DESIGNATION: Coleshill Flats, Westminster, is listed at Grade II for the following principal reasons:
* Historic interest: the building is an example of public housing built by one of the early public housing organisations, which sought to provide improved living conditions for the urban poor.
* Architectural interest: the building is a handsome and externally well-preserved example of its type, which demonstrates the intention of the IIDC to provide light, well ventilated, and well constructed accommodation for its tenants. The open stair wells and iron-fronted access balconies are standard features of IIDC housing.