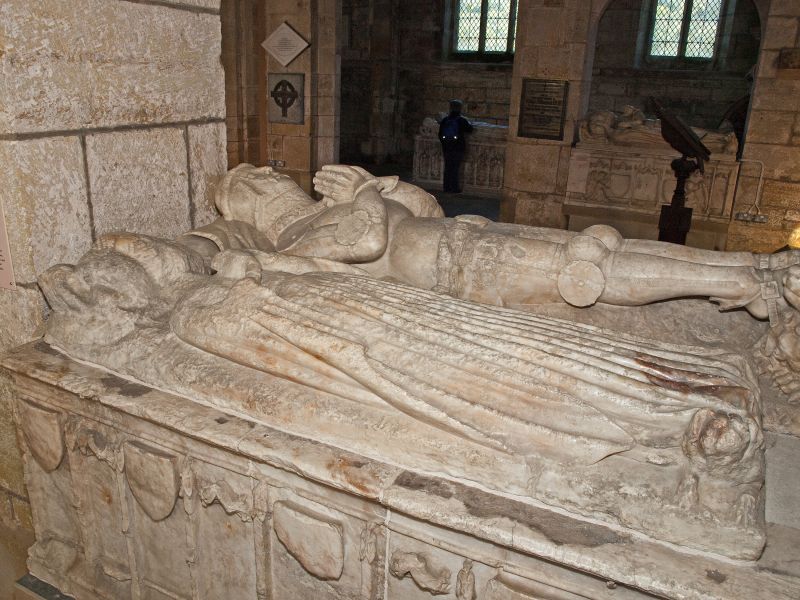 Interior: tower is penetrated by 3 tall pointed arches leading directly into 4-bay
nave which has graceful pointed-arched arcades carried on tall octagonal columns
without capitals the chamfers running into the 2 orders of the arches. C19 roof
carried on corbels at the junction of earlier roof line, the roof being raised
5 courses. Running round the aisle windows is a continuous moulded sill band.
Eastern 2 bays of aisles occupied by Chantry chapels: Gascoigne and Redman chapels.
Both are separated from the aisle by tall pointed arch in line with chancel arch,
each have niches flanking east window. Gascoigne (south) chapel has tomb recess
and semi-octagonal piscina.
The glory of the church are the set of medieval alabaster monuments restored 1979-81:
6 recumbent couples on tomb chests. One of the figures is Sir William Gascoigne,
Lord Chief Justice, in judge's robes c1419. They remain the largest collection of
alabaster monuments in a parish church within the dates 1419-1510. They are all
members of families connected with owners of land now forming the Harewood Estate.
Fine wall monument to Sir Thomas Denison c1765 by N. Hedges (London).
Furnishings: Norman font has shallow bowl and rope-moulded foot set on later base.
C19 octagonal pulpit, high Victorian Gothic with shafted marble columns and finely-
carved stone panels. Oak-panelled Sanctuary c1920. Altar rail and gates memorial
to King George V by H.R.H. Princess Royal in which is incorporated 4 insignia, the
Orders of the British Empire; the Thistle; the Garter; and St. Patrick.