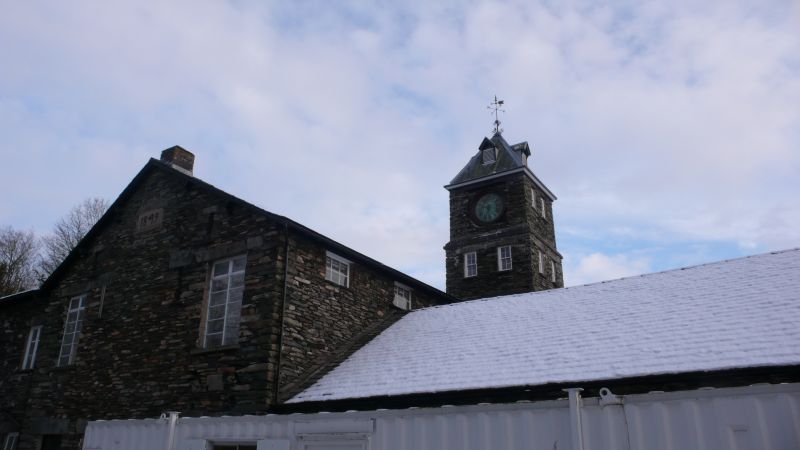 PLAN: The building is U-shaped in plan.

EXTERIOR: The front south-east façade is stepped. At the right end steps flanked by modern iron railings lead to two doors giving access to the warehouse wing. The main block projects forward as a gable and is accessed by a ramp leading to a tall round-arched doorway containing double timber doors and a radial bar fanlight. The clock tower projects forward of the left side of the gable and displays a mix of round-arched and rectangular sash windows with glazing bars. The tower has a band over the first stage, a weathered band over the second stage, and is topped by a pyramidal roof with lead flashing and a decorative wrought-iron finial incorporating a weather vane. There is a round-faced clock displaying Roman numerals in a square recess on the north-west face of the tower. The remainder of the front is stepped back and is formed by the side elevation of one of the single storey wings.

The left return comprises the gables of the two single-storey wings, one containing two windows between which there is a gable stack, the other containing an inserted large sliding door.

The rear elevation consists of: the side elevation of one of the single-storey wings which contains three windows and evidence for blocked doorways; the gable of the main block which possesses two doors to the ground floor with two windows to the upper first floor and ventilation slots beneath a centrally-placed datestone of 1849; and the north-east warehouse wing which possesses two ground-floor doors with two flanking windows to the side and above.

The right gable return has three windows at first floor level with a centrally-placed datestone of 1849 above.

INTERIOR: The upper floor of the refinery's main block functions as a retail outlet. It has a suspended ceiling that partially covers a row of windows set high in the left wall. Doors in the right wall give access into a stock room and kitchen in the former warehouse. A door in the south-east wall gives access into the first floor of the clock tower where stairs lead to the upper floors until access is blocked to the highest floors. The right half of the upper floor of the warehouse is accessed from the front elevation and contains an office with a modern partition, beyond which is a kitchen.

The ground floor of the building is accessed from the rear. The north-east warehouse wing contains two bays originally divided by a wall that now has a large opening inserted. The main block has a long passage with five round-headed arches to the right giving access into one of the single-storey ranges now used as a workshop. At the head of the passage there is access into the clock tower where there is a round-headed window and a blocked door. Steps lead from the head of the passage into a parallel former boilerman's passage in which there are six furnaces, all of which were subsequently modified since first built. Three are now blocked. The iron furnaces survive incompletely while the boiling vats which they heated remain in situ. Other surviving original features associated with the refining process include cast iron taps for draining the boiling vats above two of the furnaces and a drain which is thought to have collected both/either the left over solution from the crystallising pans and/or the washing water.

The southernmost of the two single-storey wings is subdivided into three cells by the insertion of a modern partition. The central cell is used as a workshop. The western end cell has a chimney breast next to which a window has been inserted into a blocked doorway. This cell has also has a modern subdivision.

HISTORY: Lowwood Clock Tower Works was originally the saltpetre (potassium nitrate) refinery for the Lowwood Gunpowder Works which opened in 1799 and was built on the site of an earlier C18 iron furnace/forge complex. The main part of the refinery was totally rebuilt in 1849 and all physical evidence for the early refining process carried out before this date was destroyed. The south-west range of the casting house associated with the furnace/forge appears to have been partly reconstructed as two single-storey sheds before 1846 and apart from their very northern ends, they appear to have been unaffected when the rest of the blast furnace/saltpetre refinery was rebuilt in 1849. These two sheds, described hereon as the 'southern wings', are thought to have functioned as crystallising or washing sheds both before and after the 1849 rebuild.

The 1849 rebuild of the northern part of the building provided larger and more modern facilities for the refining process together with more spacious warehousing and retained the earlier ironworks bridge house together with the southern wings. It also included a five-storey clock tower.

The main block has remained relatively little-altered since 1849; the principal changes are the recent insertion of a first floor across the whole of its interior in place of an original split-level first floor, and the demolition above the new floor of a long chimney stack leading from the furnaces on the ground floor. The eastern of the two southern wings is now divided into three parts internally by an inserted stone wall and a modern timber partition.

The refinery had closed by the mid-1920s and the south-western of the southern wings was in use as a sulphur store and the north end as a saltpetre store. Throughout the whole of the building there are numerous blocked doors and windows and replacements to fit the current use of the building as retail outlets and workshop.

The Clock Tower Works was listed at Grade II in 1985

REASONS FOR DESIGNATION:
This mid-C19 saltpetre refinery with remains of an earlier C18 ironworks is designated at Grade II* for the following principal reasons:

* Rarity: it is the sole upstanding survival of a saltpetre refinery associated with a gunpowder works in the country that still retains original internal fixtures and fittings
* Design quality: despite conversion of parts of the building to modern usage the refinery's original plan and layout is still clearly legible
* Intactness: survey work undertaken in 2000 indicated that the building contains numerous in situ surviving original fixtures and fittings relating to the refining process that had not previously been recognised when the building was originally listed in 1985. These features clearly facilitate an understanding of how saltpetre was refined in this building
* Architectural interest: the refinery's prominent multi-storey clock tower dominates the surrounding hamlet of Lowwood and remains visible over a wide area as originally intended
* Interest: the building is a unique and interesting example of a saltpetre refinery that contains surviving elements of an C18 ironworks that preceded it.