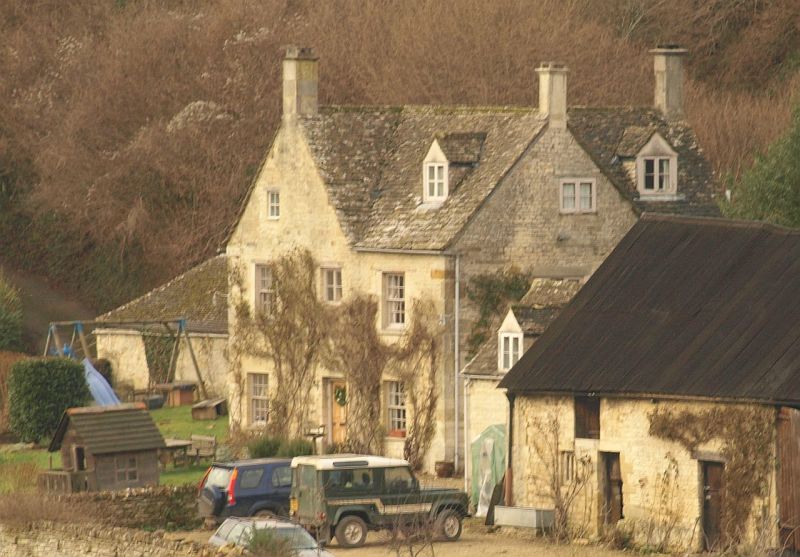 5/10000 Snows Fmnhowe
GV II
Farmhouse, now house. C17, with early/mid C19 and late C20
modifications. Coursed limestone rubble with ashlar dressings,
stone slate roof. An L-plan house, with entry to rear room on
inner return, later replaced by gable entry; staircase position
not established. Two storeys and attic; the west front with 2
windows, 1994 two-light gabled dormers above 3-light
hollow-chamfer stone-mullioned casements with stopped drips to
first floor, above C20 3-light replica and one 16-pane sash.
Small square ashlar stack with capping to each gable. The
entrance front has a 2-light wood casement to the attic, and a
1994 dormer in the adjacent roof-slope to the wing, above a 1994
sixteen-pane sash to a modified earlier opening, a 2-light wood
casement, and a 16-pane sash. The ground floor has a 1994
sixteen-pane sash to the left, and a similar C19 sash to the
right; between these, in the right-half of the gable end, which
continues flush to the wing, is a 6-panel C18 part-glazed door
in plain reveals. Irregularities in the stonework on this front
suggest that the main range to the left may have been grafted to
the earlier wing. The return gable, with an ashlar stack, has a
wooden casement at each level, 2-light to the attic, and 3-light
below, the latter to reconstructed stone lintels. A low one
storey addition with lean-to roof covers the projecting main
range behind. The outer end gable against the land slope is
plain. Interior: work of modification was under way at the
time of inspection (January 1994). The gable entrance faces a
C19 stair with stick balustrade. To the right is one room with a
heavy and deep-chamfered beam,possibly of the early C17, and to
the left there is a stopped-chamfer beam of slightly later date,
and a broad fireplace with stone lintel; this room opens through
a C19 panelled door to a rear room with a stone-flagged
floor, chamfered ceiling beam, and C20 wood bressumer
fireplace to chamfered stone cheeks. This room has a wide early
3-plank door on a broad and worn stone threshold leading to the
lean-to addition, but probably the original front entry. The
first floor rooms have chamfered beams, that to the shorter wing
again earlier than the others, and very heavy. A 1994 staircase
leads to the attic level, where the long range has 3 bays of
roof with heavy principals and two trenched purlins with
cross-over tenons, in the short wing the single truss has a
halved and pegged collar.
The farm is sited on the north slope to the steep-sided
valley of Tilley Brook, forming an important historical group
with its adjacent farm buildings (qv).