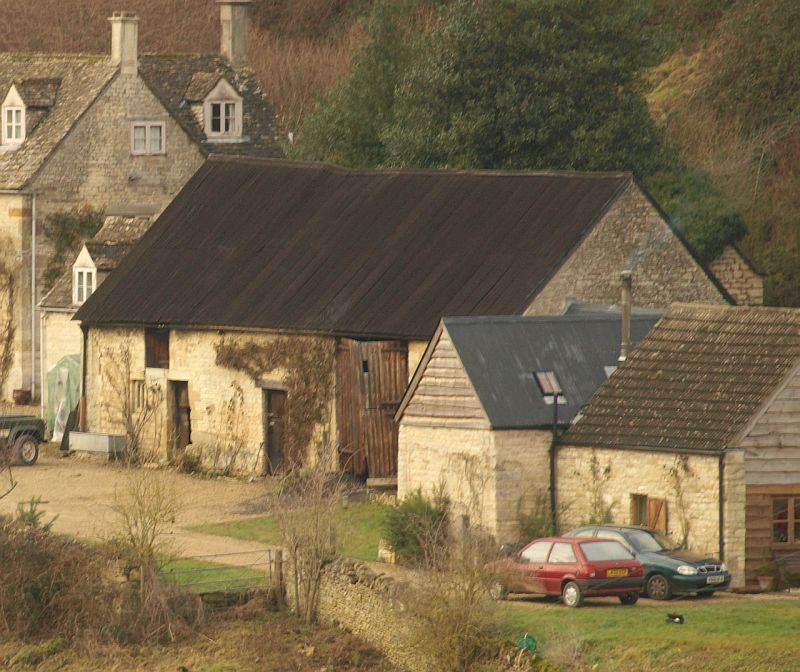 PAINSWICK STEANBRIDGE LANE
SO 80 NE
Slad
5/10001 Farm building at Snows
Farm
GV II
Group of farm buildings, including barn, open-fronted cart-shed,
and former stable. Early C18 or earlier barn with early/mid C19
additions. Coursed limestone rubble, corrugated iron, stone
slate and concrete tile roofs. A long east-west range extending
opposite the gable end of the wing of the farmhouse (qv), with a
short return to the cart-shed at the right-hand end. The long
central barn with gabled ends is set against the ground slope to
the rear. The front has a square loading-door at eaves level to
the left, above a small double lancet cut from a single stone
and set in plain reveals, and a stable door; towards the
right-hand end is a full-height pair of plank doors, with, to
the left, a smaller plank door to a wood lintol. The barn and
cart-shed have corrugated roofs. To the left, set back, is the
former stable, with reinstated stone slate roof, with a pitching
opening and stable door in the gable facing the farmhouse, and 2
small gabled casement dormers to the front. At the rear, on a
short flight of steps, is a door under a gabled head. At the
opposite end is the cart-shed, a small unit on an L-plan, with 4
short tapered round piers in coursed rubble; the rear and end
walls in rubble. This is attached to a later C19 gabled shed,
built independently, with concrete tiled roof and with doors to
the east. The barn and this last outbuilding have very large
open-textured stones as plinth and foundation.
Interior: the barn has 4
bays of early trusses with 2 purlins and tie-beams, but one with
queen-post strutting, and the rear wall has a blocked opening
opposite the main doors, but half-depth only; this probably had
a pair of loading doors at this upper level. The low cart-shed
of narrow span has 3 and 2 bays of rough trusses with flush
purlins and tie beams. With
the adjacent farmhouse this range forms a good group with both
hisotrical and architectural interest.