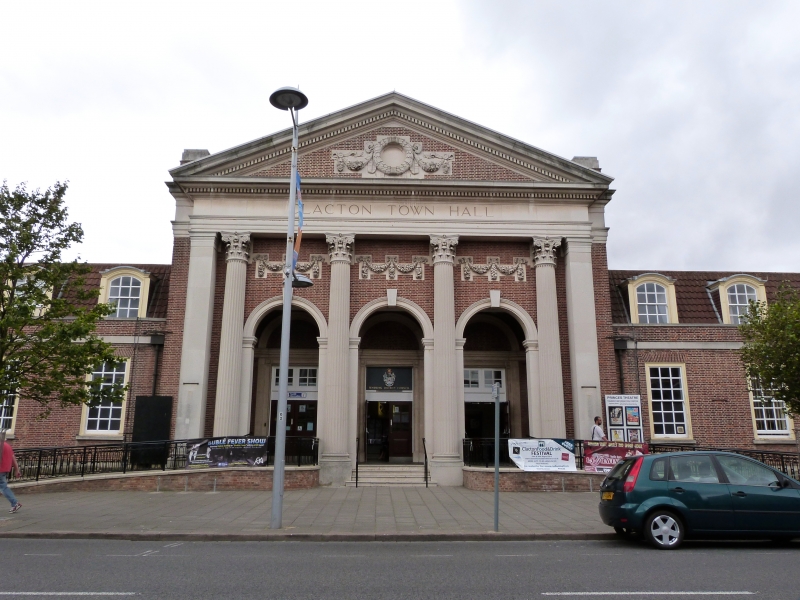 II
Town hall with incorporated theatre which originally housed a library as well. Completed in 1931 to the designs of Sir Brumwell Thomas in Neo-Georgian style. Brown brick in English bond with stone dressings and hipped or mansard pantiled roofs.

Square on plan with central vestibule, theatre behind, council chamber and committee rooms to the south and originally library to the north, now theatre bar. Principal feature of east front is massive central pedimented portico of three bays. Pediment has deeply carved stone wreath flanked by swags. Engaged Composite fluted columns and Doric piers at sides. Three round-headed arches with keystones and impost blocks and decoration of carved swags above. Steps to street and three round headed entrances behind with double doors. Flanking wings are of one storey and attics five bays with stone parapet, cornice and plinth. Curved dormers with 12 pane sashes and 18 pane sashes below. These wings terminate in one bay corner pavilions with hipped roofs and 18 pane sashes with Diocletian windows above, set in moulded architraves with brackets flanked by pilasters. South front is similar but with central five-light curved bay. North front similar but with central doorcase with cornice, moulded architrave, double door and rectangular fanlight with intersecting arches originally the library entrance. West front has central fly tower to theatre with blank square window openings above roof level of theatre and central tall round headed opening with impost blocks, an architectural feature ingeniously disguising a utilitarian scenery door.

The interior has entrance vestibule with coffered barrel-vaulted ceiling, theatre of five bays with coffered barrel-vaulted ceiling, round headed arches to sides and cambered proscenium arch with carved municipal coat of arms, council chamber, committee rooms and mayor's parlour with original joinery and corridors with round headed arches and marble floors.