Roman Catholic Church of Our Lady of Light and St Osyth 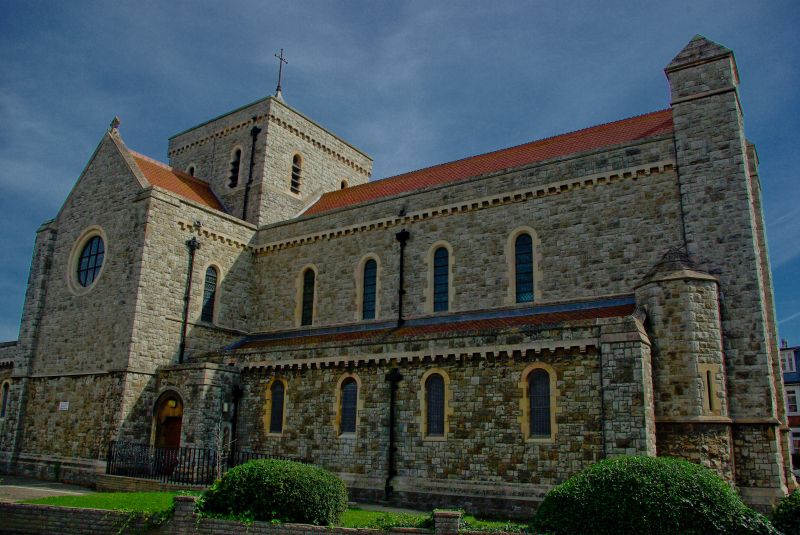 Entry Name: Roman Catholic Church of Our Lady of Light and St Osyth

A large Roman Catholic church in Neo-Norman style, built in 1902-3 and designed by F.W. Tasker.

MATERIALS: the walls are faced in Kentish ragstone over a brick core, with Ketton stone dressings. The roofs are plain tiled.

PLAN: the plan is cruciform, consisting of an aisled nave, crossing with tower over, transepts and an apsidal east end with ambulatory. A later sacristy is attached to the east.

EXTERIOR: the nave is of four bays, with round-headed windows, clerestory and corbel band at eaves level. At the west end there are square corner turrets with pyramidal stone caps. Between these is a three-light west window over a round-headed arch with four tiers of colonnettes and oak plank entrance doors with elaborate hinges. The three-stage square crossing tower has wooden shutters to the bell stage and a pyramidal roof with an iron cross at its apex. The gabled transepts has circular windows. The north and south doors have Carnarvon arches. The east end is apsidal, with a narrow ambulatory wrapping around it and athree-bay sacristy with an open porch to the east.

INTERIOR: inside, the arcades and dressings are of Lincolnshire limestone, while the main wall surfaces are plastered and painted. The floors are of woodblock, with marble in the sanctuary. The nave is of five bays with a barrel vault of Canadian redwood. At the west end is a stone organ gallery. Below this in the south west corner is a stone vaulted former baptistery, now adapted to serve as a confessional. The Norman style nave arcade has circular piers with scalloped capitals and stone groin vaulting to the aisles. There is a high groin vaulted ceiling at the crossing, while the transepts like the nave are timber barrel vaulted. The sanctuary has a seven-arched arcade with a groin-vaulted ambulatory, with the later sacristyl eading off to the east. There are two side chapels on the eastern side of the transepts: the shrine to Our Lady of Light on the north side, and the Blessed Sacrament (formerly Sacred Heart) chapel on the south side.
FIXTURES AND FITTINGS: in the sanctuary, neo-Norman fittings include an altar and stone ambo of 1998, and a (relocated) font of 1909, large and square and carried on four stubby columns, with an oak cover with iron strapwork. In the north transept chapel, a statue of Our Lady of Light is set within a neo-Norman aedicule of stone and polished marble, over a neo-Norman altar with open arcading. In the south transept, an opus sectile figure of the Sacred Heart is placed within a neo-Norman arch over a plain Gothic altar. The seating consists of plain oak benches of c1950, apart from two at the back of the nave, which are larger and more elaborate, and date from c1926. In the nave are oak figures of St Anthony and St Joseph, on columns and under canopies, which appear to date from the 1920s.

STAINED GLASS: stained glass includes windows by Jones and Willis in the ambulatory (Nativity, Agony in the Garden, Christ before Pilate, Resurrection, the last signed, c1903) and aisles (Our Lady of Light, signed, and a window to Fr Alfred Swaby OP, both 1925).

Clacton grew as a seaside resort from the mid-C19. Mass was said for local Catholics and visitors in a variety of improvised locations, including a Martello Tower and a small room over a fruit shop in Station Road. A mission was not fully established until 1894, when Mrs Pauline de Bary and Mrs Agnes St John acquired a plot of land and a house at the corner of Church Road and Holland Road for £2400.

Mrs de Bary and Mrs St John were the guardians of a statue of Our Lady of Light, the centrepiece of a shrine which had been established at Sclerder, Cornwall in 1834 by members of the Trelawny family. It took its name from the shrine to Our Lady of Light (‘Intron VariaarSklerder’) in Brittany. ‘Sclerder’ is also the Cornish word for light, and the estate at Trelawne was so renamed. The shrine survived the Trelawny family, which died out in the 1860s, being maintained by a succession of secular and religious clergy until taken over by Pauline de Bary, widow of Richard de Bary of Weston Hall, Worcs. Mrs de Bary restored the shrine and installed a wooden statue of Our Lady and the shrine became a pilgrimage centre. However, what Wilson describes as ‘various difficulties’ arose, and a decision was taken by Mrs de Bary and Mrs St John to move the shrine to another location. They approached Cardinal Vaughan, who suggested Clacton-on-Sea, where there was a need for a mission.

In 1895 the Oblates of St Charles at Bayswater were invited to take over the running of the shrine, and Cardinal Vaughan of Westminster undertook to erect the Confraternity of Our Lady of Light there. Leonard Stokes prepared designs for a large church in his personal version of free Gothic, which were exhibited at the Royal Academy in 1896. This scheme was not pursued and instead in 1901 the Chapter of the Oblates approved the building of a small chapel, costing about £2000. After visiting Clacton however, Canon Wyndham, Father Superior of the Oblates, concluded that ‘the building of a small church or a cheap one does not seem practical. For a place as isolated as Clacton, the building itself should be expressive of the Holy Catholic Faith’ (quoted in Wilson et al,10). Canon Wyndham himself offered a considerable sum towards the project, and in April 1902 work started on a large church in Norman style, costing about £10,000, the design said to be based on St Bartholomew, Smithfield. The architect was FW Tasker and the builders Messrs S Fancourt Halliday of Stamford, Lincolnshire (from where much of the stone used for the building came). The foundation stone was laid by Canon Wyndham on 4 September 1902. The church was dedicated to Our Lady of Light and St Osyth, the Saxon abbess of a nearby convent and later Augustinian abbey. The western portion (nave and aisles) was opened on 24 May 1903 and the completed church opened on 15 October 1903. The Oblates of St Charles brought many items from London, including books and vestments, and four bells which were hung in the new tower.

In 1909 the sacristy was added at the east end and a Ketton stone pulpit introduced, the latter the gift of AG Swannell, who also gave the high altar, communion rails and font. In the 1920s carved wooden Stations of the Cross were put up and an oak war memorial lych gate built at the entrance to the churchyard.

Post-Vatican II reordering involved the removal of the high altar and altar rails. In 1998 the sanctuary was reordered by the David Rackham Partnership, with new altar and ambo. The church was consecrated by Bishop Thomas McMahon of Brentwood on 15 October 2004, 101 years to the day after the official opening.

The Roman Catholic Church of Our Lady of Light and St Osyth, designed by F.W. Tasker and constructed in 1902-3, Church Road, Clacton-on-Sea, is listed at Grade II for the following principal reasons:
* Architectural interest: as an ambitious early-C20 neo-Norman design with accomplished treatment of stonework and detailing to the exterior;
* Interior: the Church has a finely detailed and executed vaulted and arcaded interior which retains many fixtures and fittings of interest;
* Group Value: the Church has proximity with the lych gate at the entrance to the church grounds.