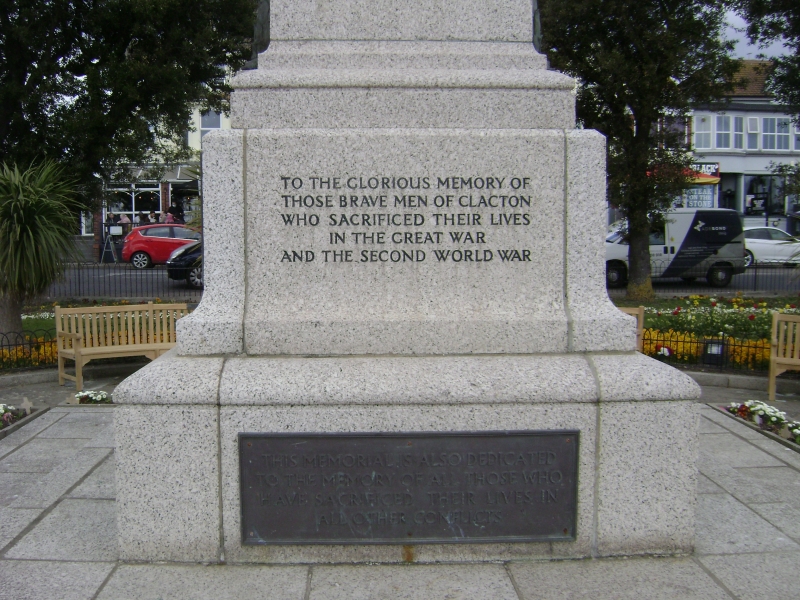 Bronze winged Victory sculpture, head slightly downcast, wearing a loose, flowing dress. She holds a quill in her left hand and a laurel wreath in her right. The statue stands atop a layered plinth of Cornish granite. The front face of the upper section reads: 1914 - 1918 / 1939 - 1945; the middle: TO THE GLORIOUS MEMORY OF / THOSE BRAVE MEN OF CLACTON / WHO SACRIFICED THEIR LIVES / IN THE GREAT WAR / AND THE SECOND WORLD WAR; and the lower bears a plaque reading: THIS MEMORIAL IS ALSO DEDICATED / TO THE MEMORY OF ALL THOSE WHO / HAVE SACRIFICED THEIR LIVES IN / ALL OTHER CONFLICTS. Both the right and left faces of the plinth bear a bronze wreath, with plaques listing the names of the Fallen of the First World War (right) and Second World War (left). The whole stands on a two-step base.

This List entry has been amended to add the source for War Memorials Online. This source was not used in the compilation of this List entry but is added here as a guide for further reading, 20 July 2017.

The aftermath of the First World War saw the biggest single wave of public commemoration ever with tens of thousands of memorials erected across the country. This was the result of both the huge impact on communities of the loss of three quarters of a million British lives, and also the official policy of not repatriating the dead, which meant that the memorials provided the main focus of the grief felt at this great loss.

One such memorial was raised in Clacton-on-Sea as a permanent testament to the sacrifices made by the members of the local community. It was designed by Charles Leonard Hartwell and unveiled on 6 April 1924 by Lord Lambourne, Lord Lieutenant of Essex. Additional inscriptions were added after the Second World War to honour the Fallen of that conflict, including civilians. The memorial was cleaned and refurbished by Tendring District Council in 2015.

Born in Blackheath, Kent the sculptor Charles Leonard Hartwell (1873-1951) trained at the City and Guilds School under WS Frith, and at the Royal Academy from 1896, studying privately with Edward Onslow Ford and Hamo Thornycroft. Hartwell was elected RA in 1924, and exhibited at the Royal Academy until the end of his life, specialising in figure sculpture and portraiture in the Romantic tradition of British art. Hartwell worked on several war memorials, including the impressive South African War Memorial, Brighton (Grade II), and two casts of St George and the Dragon - one on Eldon Square, Newcastle (Grade II*), the other in St John's Wood, London (Grade II).

Clacton-on-Sea War Memorial is listed at Grade II for the following principal reasons:
* Historic interest: as an eloquent witness to the tragic impact of world events on the local community, and the sacrifices they made in the conflict of the C20;
* Design: as an imposing and well-executed memorial consisting of a bronze winged Victory sculpture atop a layered plinth, situated in a Registered Historic Park and Garden.