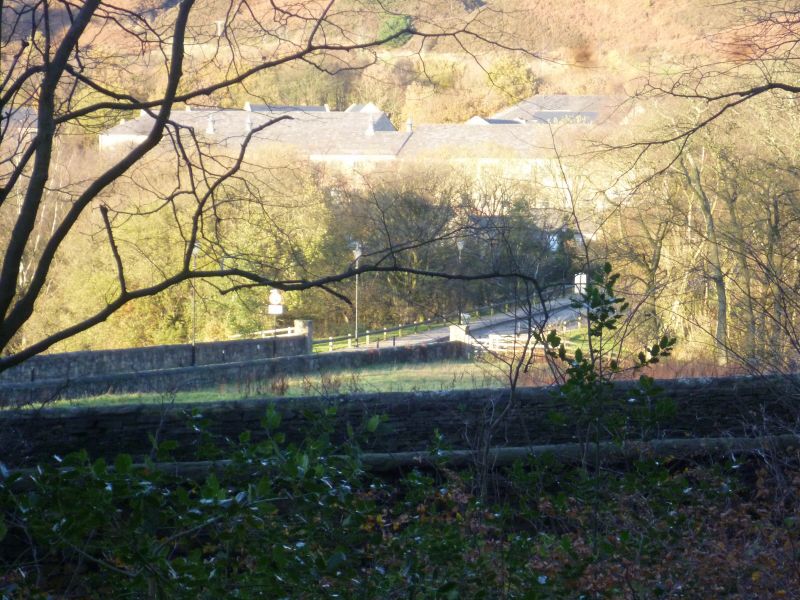 GV
II
Former bleaching and finishing works. Parts later used by Arcon Engineering Co and North-West Water Authority. The site has buildings ranging in date from the late C18 to the late C19, with date stones of 1840, 1858 and 1873. Built for the firm of Thomas Ridgway and Company. Coursed gritstone rubble and coursed squared gritstone, with brick additions; stone and slate roofs quoins.

The description follows the chronological development of the site in four parts: late C18, c1828, 1840 and mid/late C19.

LATE C18: the earlier buildings are located on the north west and central areas, with later development to south east. Earlier access to the site is the western route, passing the entrance to Wallsuches, an early C19 mansion (qv). The road enters the bleachworks site at a yard area between two ranges with agricultural characteristics, possibly 'grey sheds', where cloth was stored before work began. On the north side: a two storey, seven bay range with four blocked flat arches supported by wooden lintels, monolithic stone corners and jambs, upper storey possibly a rebuild, added bay far left extending northwards as a long range (see below). The building on the south side of the yard has the appearance of a barn with central cart entrance and end byre doors, similar monolithic jambstones to centre, C20 additions and alterations. A cobbled pathway rises to the east and passes between two more late C18/ early C19 buildings: on the left a range of five storeys, blocked loading door top floor left; widely-spaced small windows, many blocked. Shallow eaves, blocked windows on left return. The only surviving building which could be the 'Gingham House' built by Thomas Ridgway (see below). Two-storey L-shaped block to right of this is now a house, with large C20 windows inserted. Backing onto the south side of this pathway: a three storey, 4+1 bay range with central tall round arch rising through two storeys on the south side and clock in gablet above eaves; the roofless right bay also has round arch, in course of rebuilding. The coursed gritstone rubble, quoins, plain door surrounds and widely-spaced windows suggest a late C18 date and this may be the engine house for the 10hp Watt steam engine bought to power calendaring machines in 1796. The interior of the arched opening has timber longitudinal beams, joists and floor boards to the upper floor, with extra re-used timbers inserted between. Over one metre of debris has raised the ground level outside, where a crane stood by the mid C19 (OS map).

c1828 BUILDINGS: to west of this building: domestic-style two storey, five bay block, ground floor part stone, the remainder of brick, with hipped slate roof, two round-arched doorways in slightly projecting bays, left blocked; possibly an office building. In 1828 the bleach croft was completely re-organised (see below), and buildings at the centre of the site are probably of this phase, in particular the much-reduced range on the north side of the lower roadway, formerly four storeys and 28 bays, now two storeys and sixteen bays with two four-centred arched entrances built in rusticated voussoirs. (The complete building photographed from the air c1924 and see Ashmore,1969, p.53).

A tall square-section chimney stood to the rear of the east end of this range. A long two storey rubble-built range lies parallel to the altered block, with hipped roof and bellcot at the west end. The end wall has rusticated masonry to ground floor and round-arched windows, the side wall of rubble, openings all blocked and evidence of much alteration (a first floor covered bridge over the roadway demolished). A boiler is set outside the east end, between the rubble range and a long brick workshop, part of the latest development of the site.

1840 BUILDING: on the west side of the site a long six window range was built in 1840 on the west side of the roadway leading north-east to Ridgway Delf, parallel to the north addition to the early open-sided shed described above. The central tall round archway has edge-tooled and reeded voussoirs, keystone with date, and the windows are large, with late C20 rebuilding ground floor left. The archway gave access to a rear yard with open sheds, not seen. The buildings flanking this road are now part of the North West Water Authority Pennine Division, Marklands Treatment Works.

MID/LATE C19 BUILDINGS: before 1860 the firm of Thomas Ridgway and Co became bleachers and dyers. A datestone of 1858 is set into the end of the building on the north east part of the site, uphill from the c1828 range and consisting of three single and two storey ranges with roof lights and ventilators. Three additions/rebuilds of C20 on east side. The latest buildings on the site, including a datestone of 1873, stand to south west of the c1828 building. A total of five parallel roofs to single and two storey sheds with ridge ventilators and roof lights. The latest engine house, c1870, with boarded round-arched window and hood-mould, stands at the south end of the group, with two post-1893 sheds with ridge ventilation to south again. The need for abundant supplies of pure water for bleaching is evident from the extensive layout of reservoirs and filter beds on three sides of the site, all of which are shown on the 1845 OS map. The earlier buildings were constructed along the line of a water course between the west reservoir and the rectangular pond on the east side; the northern ponds possibly date from the 1828 extensions, with a long filter bed built to north east.

EXTRA INFORMATION: bleaching and finishing was generally done in single storey buildings because of the weight of the machinery and the problems in moving very large quantities of wet cloth through the soaking and washing processes. The earlier separate small buildings represent a stage before the processes were gathered under single large roofed areas. At Wallsuches the construction of multi-storey ranges suggests that very large amounts of cloth were being treated, the upper floors used for the 'making up' stages.

HISTORY: the method of chemical bleaching using chlorine gas was discovered in 1774. In 1777 James Ridgway's bleaching firm moved from the centre of Bolton to Wallsuches, Horwich and the new process was first applied on a large scale here by John and Thomas Ridgway. Thomas pioneered the use of chlorine in bleaching and helped Crompton with his inventions. The five-storey 'Gingham House' was built in 1798, and a 10h.p. James Watt steam engine installed to turn mangles and a glazing calendar (a hollow cylinder with heated irons which gave the cloth a glaze). Thomas Ridgway died in 1816 and his sons, Joseph and Thomas, took over; in 1818 they took Thomas Bridson as a partner. The site was re-organised and more steam power introduced in 1828, when the firm expanded to take the cloth produced at the Lever Bank works (Little Lever), the mill Bridson took over when he left Wallsuches in 1833-34. Charles and Christopher Howarth, former employees of the firm, were taken on as partners shortly afterwards and by the late C19 the site was used by Thomas Ridgway and Co. and Christopher Howarth and Son, bleachers and dyers. In 1900 Joseph Howarth sold the business to The Bleachers' Association which controlled seventy companies by 1919, twenty-two of them in the Bolton area.

EXTRA INFORMATION: 1845 OS map shows another site further west, close to the Chorley Old Road, also marked 'Wallsuches Bleach Works'; a gas works stood close by. This was probably the site of the production of chlorine gas and bleaching liquor. One of the few surviving finishing works in the Bolton area, where chemical processes in bleaching and dyeing were pioneered and where bleaching fostered the growth of the heavy chemical industry. During the early C20 the area continued to be an important focus for cloth from abroad, as the finishing process was not understood.