Angel Hotel and Motel and stables attached to the rear 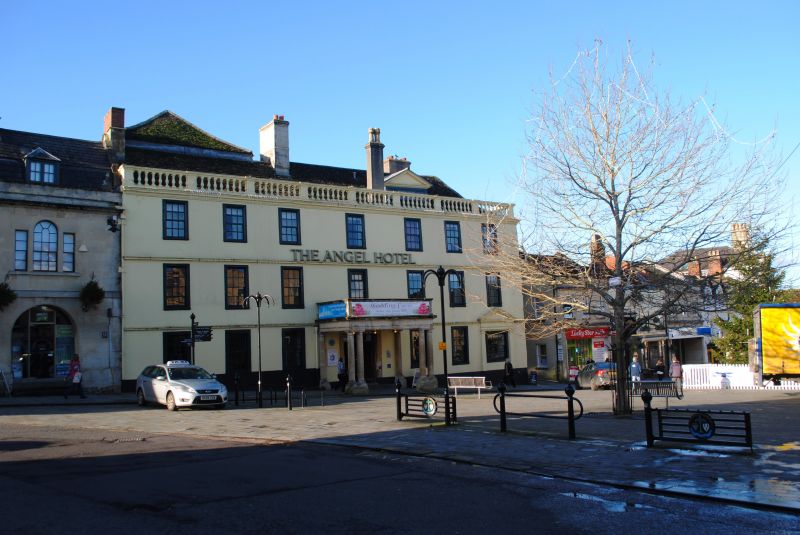 Entry Name: Angel Hotel and Motel and stables attached to the rear

CHIPPENHAM
MARKET PLACE (west side),
No. 8, Angel Hotel and Motel and stables attached to the rear

(Formerly Listed as MARKET PLACE (west side) No.8 Angel Hotel and Motel)

PLAN: five-unit plan with two rear wings and attached stable range to the rear left; original inn to north, and house to south; wing to rear of south range is said to have been an assembly room.

EXTERIOR: three storeys; symmetrical seven-window range. Balustraded parapet, cornice returned to both sides, platbands between floors, and plinth. 6/6-pane sash windows with heavy glazing bars, those to the upper floors with cyma-moulded architraves, those to the ground floor with roll-edge moulding. A large prostyle porch (restored C20) has paired Tuscan columns to the corners which support an entablature and balustraded parapet. A large pedimented dormer is to the right. To the far right is a window set in a former doorway which has engaged Tuscan columns supporting a pediment. The rear of the main block has a short central wing with a double-pitched hipped roof and a two-light stone-mullioned window.

The first block of the right wing, probably C17, has a steeply-pitched plain tile roof, an early C19 horizonal 10/10-pane sash window at eaves level, probably a former mullioned window to the left, and a 6/6-pane sash to the first-floor right. C20 windows to the ground floor. The rear block has a stone stack to the left gabled out from the roof, three truncated brick stacks above the wall and various C20 windows. The gable end has stone coping a C20 door. The C19 rear left wing is three storeys; four-window range. Window to the secondnd floor is cantilevered out over a former courtyard, nowfilled; 6/6-pane and plate-glass sash windows.

The stable block to the rear left has a stone tile roof half-hipped to the rear, gabled to the centre over depressed arched loading bay and chamfered stone doorway.

HISTORY: in 1613 an inn on this site was called The Bull. By 1747 it was known as The Angel. According to Smollett, this was the hotel where the mother of Humphry Clinker, his hero in the eponymous novel, was bar-keeper. The C17 king-post roof is an unusually early example for this region, late C16 examples being recorded in Lacock.