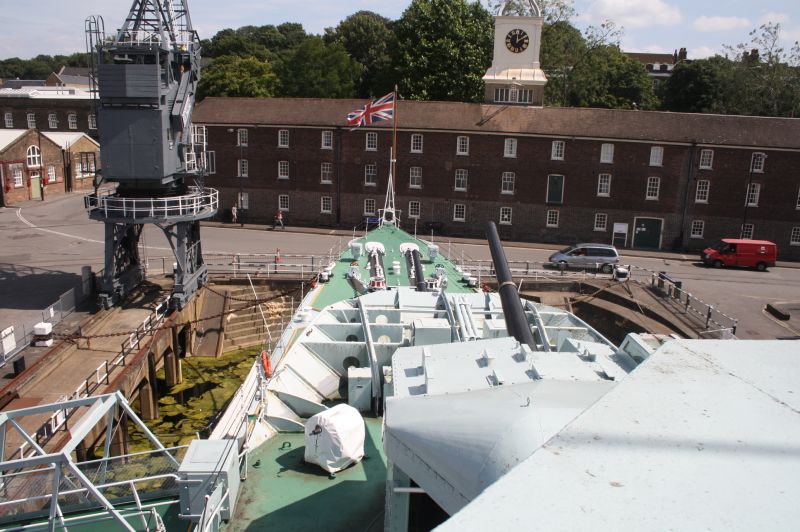 Store, mould loft and saw pits, now offices and stores. 1723, upper storeys rebuilt and encased in brick 1802, ground-floor bricked-in c1830.
MATERIALS: timber-frame on brick ground floor, encased in brick, with slate hipped roof. PLAN: rectangular single-depth plan with central axial stair.
EXTERIOR: 3 storeys; 16-window range. Large uniform block with double doors at the left-hand end and S bays from the right, and segmental-arched heads to 6/6-pane sashes. Similar rear and 2-window sides. A large square 2-stage clock tower of 1802 has a low base with mullion windows each side, a weathered band to clock tower with clock faces to each side, and 4 curved brackets to a swept pyramidal roof, gilded ball and finial.
INTERIOR: has a timber frame of heavy square timbers, 3 bays across with posts originally enclosed in the walls, bolted heavy kneelers to the roof, and aisle posts with pillows. Wide central stair flight. The roof was originally a single pitch, altered 1802 with inserted posts and central valley, and the clock tower on top.
HISTORY: originally the 6 left-hand bays were open on the ground-floor to the saw pits, which were retained when the previous building was rebuilt, and bricked-in mid C19. The clock tower came from the C17 building on the site.
The oldest surviving store in a royal dockyard, built in the early C18 reconstruction of the dockyard and of a scale in contrast to the much larger storehouses built in the yards from the 17605. Built during the same phase of construction work as the Sail Loft and boundary walls (qv), and part of a fine assemblage of Georgian naval buildings.
(Sources: Coad J: Historic Architecture of Chatham Dockyard 1700-1850: London: 1982: 149 ; Coad J: The Royal Dockyards 1690-1850: Aldershot: 1989: 130-131 ; MacDougall P: The Chatham Dockyard Story: Rainham: 1987: 58).