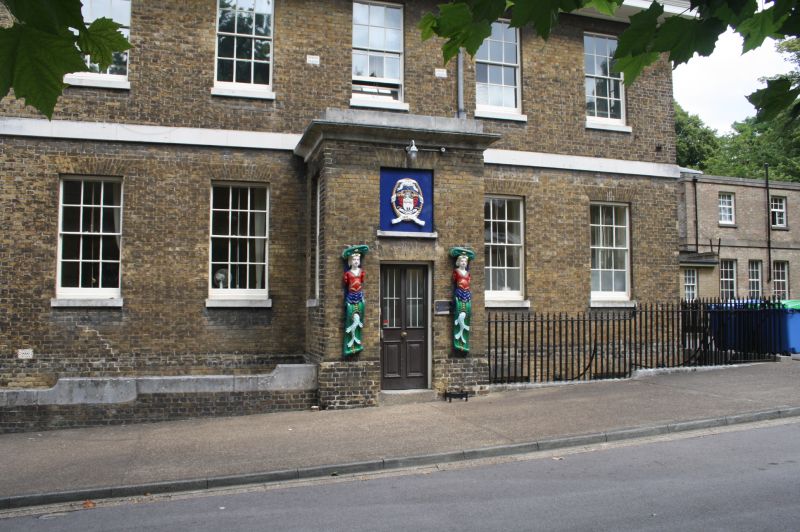 Offices. 1809, by Edward Holl, architect for the Navy Board. Brick with stone dressings and 4 brick axial stacks and a slate roof. Late Georgian style. PLAN: double-depth with a central axial passage, rear wing and mid-late C19 N extension. EXTERIOR: 2 storeys; 6: 15-window range. A symmetrical range with left-hand section set back; plinth, plat band and moulded eaves cornice, with a central pedimented 5-window section set forward with a Royal cartouche in the pediment, and distinctive wide round ground-floor 3-light bays at each end with cornices. An ashlar porch has curved steps up each side to flat-headed doorways, panelled corners, cornice and blocking course, and a central round-arched window. Rubbed brick flat arches to 6/6-pane recessed sashes, with similar windows to the left-hand end. Right-hand return 6-window range with single-storey porch with half-glazed door and sunken panel above, with carved timber herms each side with skewed Ionic capitals and a bust and furled flags to the top. Left-hand extension with similar windows with a round-arched doorway with double doors and large fanlight. INTERIOR: large entrance hall divided by 2 Doric columns to antae, with round-arched doorways each side to axial passages between end doorways, giving on to front and rear offices, and a rear stone dogleg stair with cast-iron stick balusters, curtail and wreathed rail, lit by a lantern; 6-panel doors with panelled reveals and moulded cornices.
SUBSIDIARY FEATURES: attached low front forecourt walls and iron railings to the entrance steps.
HISTORY: replaced a 1750 office, and to the same plan as the 1780$ South Office Block at Portsmouth (qv). An early specialist office building in a national context, indicative of the complexity of administration produced by the scale of the early C19 Yard, and forming part of a fine and remarkably complete assemblage of Georgian naval buildings.
(Sources: Coad J: Historic Architecture of Chatham Dockyard 1700-1850: London: 1982: 173 ; Coad J: The Royal Dockyards 1690-1850: Aldershot: 1989: 47; MacDougall P: The Chatham Dockyard Story: Rainham: 1987: 166; The Buildings of England: Newman J: West Kent & the Weald: London:1976:206)