The Ropery and Spinning Room 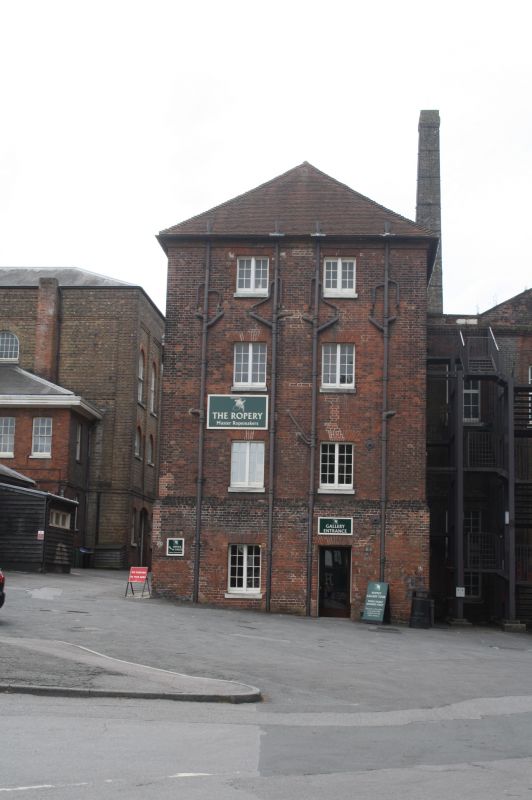 Ropery. 1785-1791, engine house added c1836. Red brick with grey headers, stone dressings and a slate valley roof, engine house English bond brick. PLAN: single-depth rectangular plan with N engine house. EXTERIOR: 3 storeys, basement and attic; 100-window range ropery. Wider 7-window end sections separated by very long central range; cambered heads to recessed casements, cambered stone lintels to E range of basement openings, and cambered heads to dormers over alternate windows. Similar dormers to the vaUey roof. Louvred ridges. Engine house attached to N end is 2 storeys and basement; 2-window range has raised ground-floor with rubbed brick segmental-arched openings, 12/12-pane sash and steps up to a right-hand doorway, round-arched first floor 1 5/12-pane sashes, and a battered square chimney shaft.
INTERIOR: a continuous open interior has square timber posts to heavy lateral floor beams, coUar truss roof with clasped purlins and ashlar posts. Contains considerable original rope-making equipment, including a Maudslay forming machine and winches of 1811 and spinning wheel and belt drive in the attic. Engine house not inspected but reported as containing the entablature support for the beam, beam floor, bearings and fly wheel.
HISTORY: known as a double ropery for combining rope laying on the ground floor and spinning on the upper 2 floors. The form of the double rope house was modelled on that at Portsmouth, and included vaulted cellars for storing tar barrels. The building is over 1,100 feet long, rope being wound by twisting the strands together on a forming machine mounted on a wheeled carriage, which ran back down the building. This was demanding hand-powered work which was much facilitated c1836 by the installation of a Boulton and Watt beam engine to power the forming and laying machines. The attic or cock loft was used for training apprentices and the basement for storing tar.
Plymouth and Portsmouth still have ropeyards but Chatham is the only one of the original four ropeyards in Naval dockyards still in operation, and with much of its original machinery complete. This is a unique instance of outstanding importance of an industrial building of this age and scale in which the process plant is largely intact and in working order.
Built as part of the late C18 rebuilding of the S end of the dockyard, with new Rigging Store, Hatchelling house in Anchor Wharf and yarn stores in Cottage Road (qqv), and part of a fine assemblage of Georgian dockyard buildings.
(Sources: Coad J: Historic Architecture of Chatham Dockyard 1700-1850: London: 1982: 162 ; -Coad J: The Royal Dockyards 1690-1850: Aldershot: 1989: 210-221 ; MacDougall P: The Chatham
Dockyard Story: Rainham: 1987: 91 ; The Buildings of England: Newman J: West Kent and the Weald: London: 1976: 205).