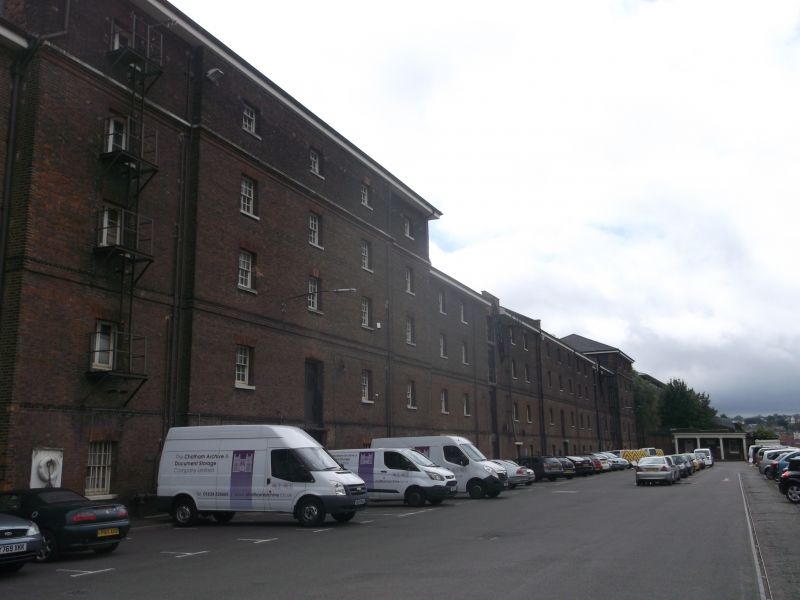 Warehouse. 1773-83. Brick with stone dressings and a slate hipped roof. PLAN: rectangular single-depth plan.
EXTERIOR: 3 storeys and basement, with attics in 3 sections; 3:13:5:13:3-window range. A symmetrical block has taller end and central sections, with ground-floor plat band, cornice and overhanging eaves, the middle block has the central 3-window section set forward. 3-storey sections have middle 3-bays set forward and hoist bays to middle of outer 5-bay sections with double doors and braced iron pivot hoists to the side of the top doors. Rubbed brick flat arches to 8/8-pane sashes and 4/8-pane second-floor sashes. End returns have single round-arched hoist bays with double doors and top 5-light lunette. A single storey lean-to for the Chain Cable store extends along the east side with former iron cannon used as piers and timber Y-braces. To the north end of this side is a mid/late C19 corrugated iron gabled roof, with bifurcated iron struts to trusses, which is linked to the west wall of the Ropery (qv).
INTERIOR: divided into a series of 3-bay timber frames, of very heavy scantling with tin-lined ceilings and double solid cast-iron panelled doors between firebreak walls, trap doors in front of hoist doors.
HISTORY: at nearly 700 feet this is the largest storehouse ever built in Britain, and with Storehouse No.2 (qv) and surviving examples at Portsmouth naval dockyard it is certainly one of the most significant examples of industrial warehousing in Europe. It was used for storing rigging, a pair with the identical warehouse to the N, and predates the large early C 19 warehouse stacks of the London docks. There were formally pediments to the centre of the lower sections. Built during the extensive late C18 rebuilding of the dockyard, and with the N warehouse and Ropery (qqv), part of a fine group of Georgian naval dockyard buildings.
(Sources: Coad J: Historic Architecture of Chatham Dockyard 1700-1850: London: 1982: 160 ; MacDougall P: The Chatham Dockyard Story: Rainham: 1987: 91 ; The Buildings of England: Newman J: West Kent and the Weald: London: 1976: 205 ; Dockland an illustrated historical survey of life and work: Tucker M: Warehouses in Docklands: London: 1986: 21-31).