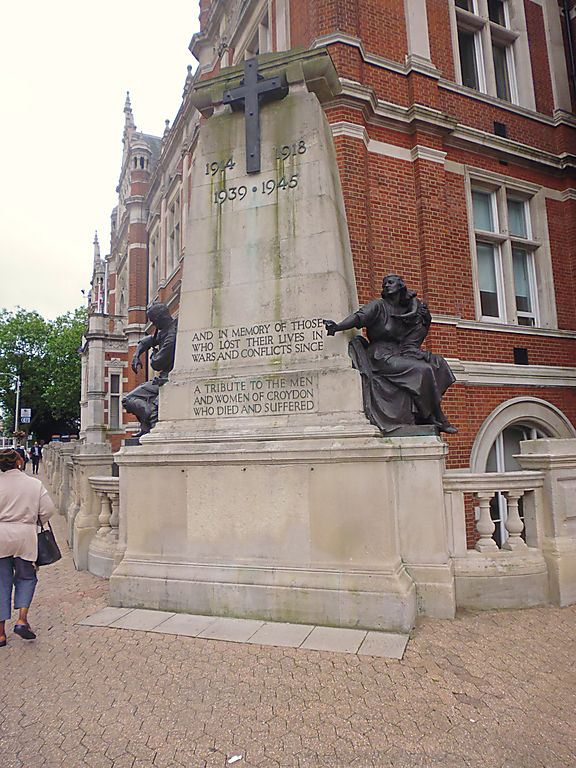 DESCRIPTION: The memorial comprises a 9m high Portland stone pylon surmounted by a sarcophagus. A bronze cross flanked by the dates 1914 and 1918 sits at at the top of the pylon; the dates 1939 and 1945 were added subsequently. The pylon is inscribed: AND IN MEMORY OF THOSE / WHO LOST THEIR LIVES IN / WARS AND CONFLICTS SINCE. The base of the pylon is inscribed: A TRIBUTE TO THE MEN / AND WOMEN OF CROYDON / WHO DIED AND SUFFERED. The pylon and statuary sit on a pedestal.

The left (north east) statue represents a soldier of the East Surrey Regiment dressing a wound on his own arm. He is sat on his greatcoat, with his rifle behind him and a Mills bomb at his feet. His water bottle is in his lap, and his puttees are covered with sacking. The soldier is helmetless, and has a field dressing around his head. The right (south west) statue shows a woman in civilian dress holding a child on her lap. She, too, is sat on a coat. Her right arm is stretched out towards the soldier, and is clutching a letter. Her face is also turned in the direction of the soldier, and her closed eyes indicate a connection between them. Her wedding ring is clearly visible, suggesting the three figures constitute a family. The base of the female figure is signed by both sculptor and founder.

The memorial is incorporated into the balustrade of the Town Hall.

The aftermath of the First World War saw an unprecedented wave of public commemoration with tens of thousands of memorials erected across the country, both as a result of the huge impact the loss of three quarters of a million British lives had on communities and the official policy of not repatriating the dead, which meant that the memorials provided the main focus of the grief felt at this great loss.

Croydon Cenotaph was raised as permanent testament to the sacrifice made by the members of the local community who lost their lives in the First World War. The cenotaph was designed by architect James Burford ARIBA, with sculpture by Paul Raphael Montford (cast by M Manenti). The monument was paid for by public subscription organised by the Borough of Croydon. The statue of the soldier was exhibited at the Royal Academy in 1921, and the complete memorial was unveiled on 22 October 1921 by Lord Ashcombe. Contemporary press reports stressed the fact that the memorial commemorated the role of women in the First World War equally with the role of men.

The memorial is incorporated into the balustrade of the Grade II listed Croydon Town Hall's outer perimeter wall and placed on the left of the principal entrance. The hall and library were designed by Charles Henman Junior and built in 1892-96: it is one of the most ambitious late Victorian municipal buildings in London and the war memorial occupies an important position in front of it. The memorial is of particular note for the balance struck between military and domestic suffering and for the sculptural quality of the figures.

Paul Raphael Montford was born in London in 1868. He studied sculpture at the Royal Academy, and won the gold medal and travelling scholarship for sculpture in 1891. Montford sculpted the figures around the entrance to the Grade II listed Royal School of Mines, and the bust of Sir Henry Campbell-Bannerman in Westminster Abbey. He also sculpted a number of public works in Scotland and Australia. Montford won the Gold Medal of the Royal Society of British Sculptors in 1934. James Burford was a London architect who published and contributed to a number of works on architecture in the 1920s.

An additional inscription commemorating the dead in conflicts post 1945 was added in 1997.

Croydon Cenotaph, designed by James Burford in 1921, and with sculpture by Paul Raphael Montford, is listed at Grade II* for the following principal reasons:

* Sculptural interest: for high quality depictions in the round of a wounded soldier and a grieving widow, by notable sculptor Paul Raphael Montford;

* Rarity: for a rare depiction of the impact of war on a family, both at the front and at home;