Fort Pendlestone Including Sluice and Leat Bridge to North 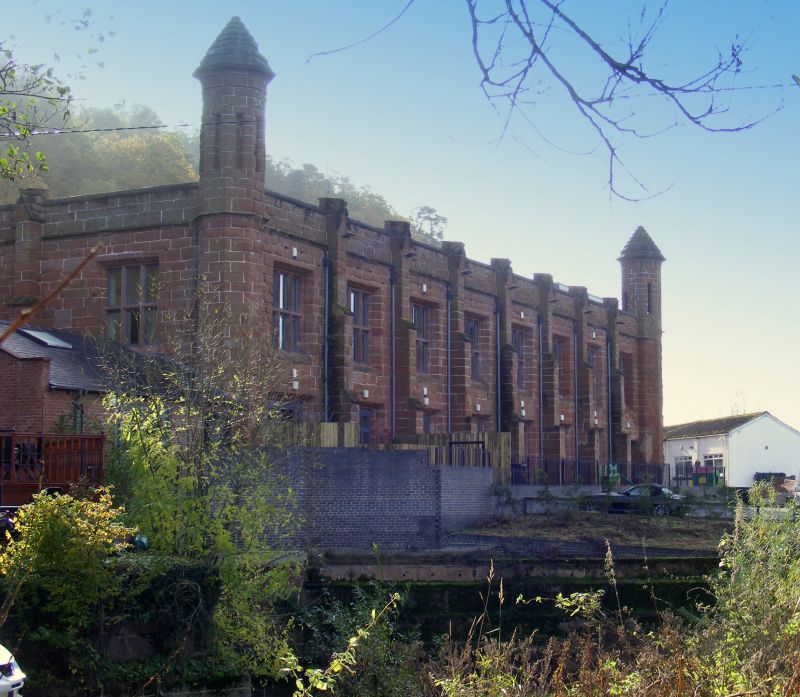 Fort Pendlestone including sluice and leat bridge to north

EXTERIOR: Large two-storey eight-bay factory with tall octagonal corner turrets with ventilation slits and pitched caps, larger stair-turret on north-east comer with battlements; the bays are divided by buttresses with set-offs and gabled at their tops above the parapet, stone mullion-transom windows with deeply chamfered reveals.

Attached to north end of factory is the small water-mill house bridged over mill race with arched doorways and two small windows on west side.

At right-angles to the south-east of the factory is the two-storey warehouse with a double-span roof with stepped gables, diagonal buttresses, four-light mullion-transom windows in the gable-end, the first floor with raised centre lights, six-bay north elevation with cross-mullion-transom windows and arched doorway in centre-right bay with loading door above.

Attached to the south side, the boiler-house with the base of the chimney on its east side and the engine-house to its left [west] with a C20 water-tank on top.

The manager's house to the east: two storeys, three bays, gabled centre bay breaks forward with set-offs, stone oriel and four-centred arch doorway with hoodmould with shield stops; two and three-light mullion windows; stepped north gable-end, its centre breaking forward with loop at top and French casement on ground floor; at south end the projecting office wing with a diagonal buttress has been extended in brick.

Across the leat to the north a three-bay brick bridge with chamfered four-centred arches and cutwaters and the sluice with cast and wrought-iron gates.

This entry was subject to a Minor Amendment on 15 November 2017.