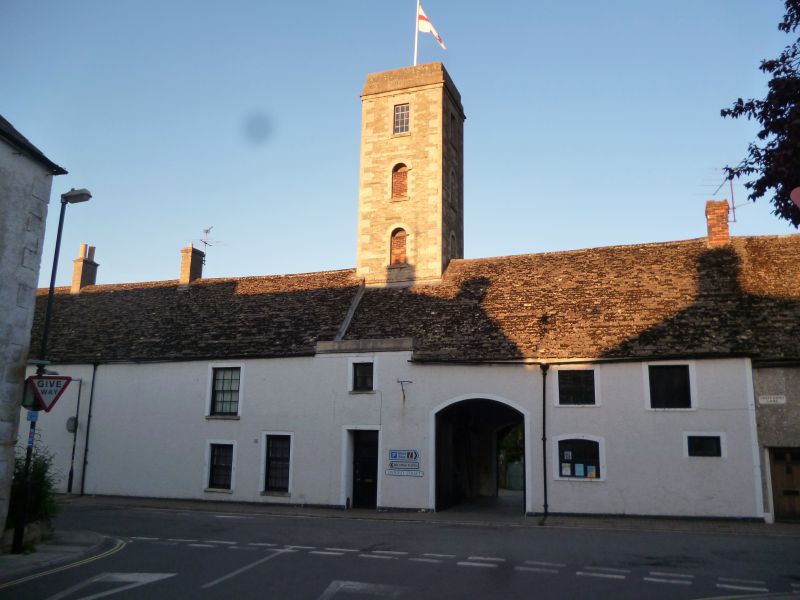 Medieval hall with later rear wing, attached to terrace of 4
houses, with inserted tower; one house since early C19, when
refronted. Late C15 hall, with a mid C16 rear wing, terrace of
four C18 houses; refronted and tower added 1834.
MATERIALS: hall of limestone rubble, rear wing of re-used
ashlar and carved work (a feature of post-Dissolution
Malmesbury) and coursed, squared limestone; tower of rubble
with dressings, rubble houses; all rendered to street
elevations, with a stone slate roof and 3 ridge stacks.
PLAN: open hall parallel to street with an E range at S end,
square tower attached within S end of terrace of single-depth
houses, with a rear wing to the N end.
EXTERIOR: 2 storeys; 7-window range, includes 5-storey;
1-window range tower. The hall has C19 openings with a
cambered arch to left-hand C19 carriage arch, 2 ground and
first-floor windows, that on the first-floor to the S a
trefoil in a square head; the E range to the rear has
ground-floor lunettes and stable doors, the E section largely
original with a blocked 4-light hollow-moulded window and E
doorway with chamfered head, and C19 9-pane windows beneath
the eaves.
The 3 N houses have a middle 1-window range and outer 2-window
ranges, that to the right with 6/6-pane sashes and a
right-hand 6/9-pane sash in the former doorway, the middle one
with a left-hand round-arched doorway and 8/8-pane sashes, and
the N one a left-hand doorway, 8/8-pane ground-floor sash and
two first-floor sashes with 6/6-panes to left and 8/8-panes to
right; three gables to rear elevation.
The S house was converted to a tower has a doorway and small
window above; the tower has quoins and dressings to
round-arched windows to the lower floors, flat-headed to the
top storey, with an ashlar parapet.
INTERIOR: details include a 3- former 4-bay roof to the hall
with collar trusses and chamfered arch braces forming
continuous arches, wind braces to the lower 2 registers, and a
diagonal through ridge beam; possible former screened passage
beneath the tower; the E range has collared trusses with wind
braces to the middle register; houses have C19 reeded
architraves with plain stops.
HISTORICAL NOTE: possibly part of an extensive courtyard

complex with the S range originally stables (Stirling).
Town work house from C18 to 1834, when converted to stables.
The N house formerly the Salutation Inn before 1803. The tower
was built for an astronomical observatory by Richard Pryor.
(Stirling D: Secular medieval buildings in Malmesbury, Wilts,
1150-1547: 1986-: 8; The Buildings of England: Pevsner N:
Wiltshire: London: 1963-: 328).