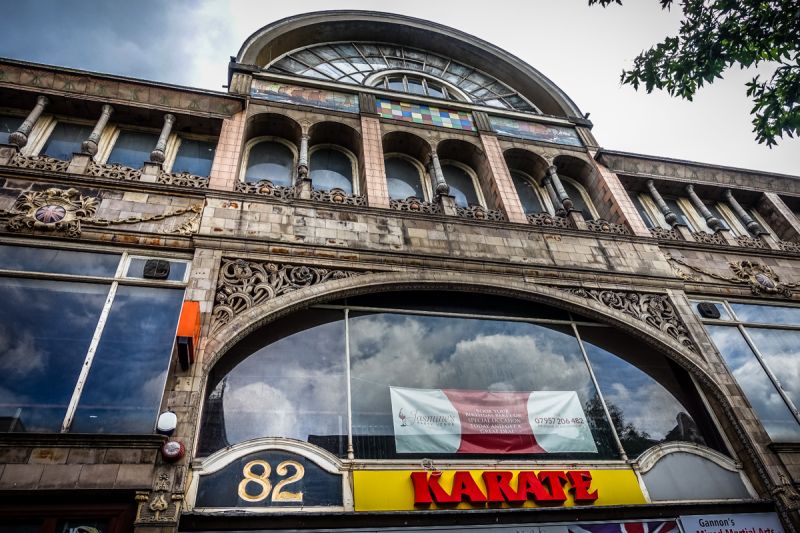 EXTERIOR, has seven window front arranged 3:1:3. Seven shop fronts mostly C20 with original faience tiled pilasters between, the central shop front and upper floor entrance slightly recessed with original wooden fascia board. First floor has broad central segmental arch with elaborate foliate spandrels and original thirteen-light plate glass showroom window. Either side three smaller original three-light plate glass showroom windows with panelled pilasters between and continuous moulded cornice above. Second floor has seven faience panels, the central one blank, and each of the flanking panels decorated with a cartouche with coloured Union Jack centre, topped with a different name panel and a representative animal, linked by strapwork chains to foliate corner decorations. From left to right the names and animals which appear above these cartouches are; AUSTRALIA with a Kangaroo, EGYPT with a camel, CANADA with a mountain lion, INDIA with a tiger, BURMAH with an elephant and AFRICA with an ostrich. Above centre has three pairs of round headed windows in deep arches with strapwork balustrades and dividing coloured columns and pilasters. Either side three four-light windows with similar balustrades and dividing columns, topped by continuous chamfered eaves cornice with Art Nouveau tiling. Central section has projecting round headed attic with large fanlight, originally topped by a statue of Britannia. Below three panels, the outer ones with tiled scenes of galleons, the inner one with late C20 coloured tiles.

This large commercial property was designed and built by Arthur Wakerley (1862-1931), a prominent local architect, developer, philanthropist and politician. Most of the building was occupied as the Midland headquarters and main showroom of the Singer Sewing Machine Co from 1904 to c 1965. It is a rare and well preserved example of an Edwardian commercial property decorated with an Art Nouveau style faience facade.