University of Sheffield Drama Studio and Attached Walls and Railings 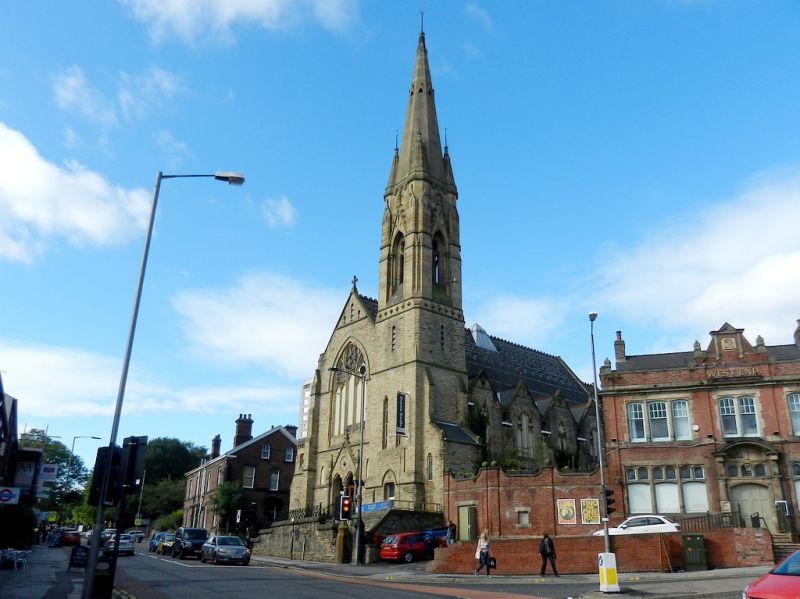 Baptist Church, and attached Sunday school, meeting rooms,
steps, wall and railing, now Drama Studio. 1869-71, Sunday
school 1886, by CJ Innocent. Converted and remodelled
internally c1980. Coursed squared stone with ashlar dressings
and slate roofs, the main roof patterned with lighter coloured
slate. Gothic Revival style.
PLAN: chancel, vestries, nave, aisles, south-west tower with
spire, north-west porch.
EXTERIOR: chamfered plinth, string course, buttresses,
shouldered coped gables, crested ridge tiles. Windows in the
main body of the church are blocked. Chancel east end has a
4-light pointed arch window with Geometrical tracery in a
moulded surround. To its right, a shouldered side wall stack.
On either side, a 2 storey vestry, that to north with 5
shouldered plain sashes and below, a C20 doorway and to its
right 4 plain sashes. Nave west end has a 5-light pointed arch
window with Geometrical tracery and moulded surround, with a
small graduated triple lancet above. Below, a double doorway
with cusped openings and central shaft, with flanking shafts
topped with pinnacles, all under a crocketed gable with a
round window. On each side, a small single lancet.
Aisles have 5 gables, each with a 3-light pointed arch window,
and below, 2 small single lancets. Some on the north side have
been replaced by C20 doors. At the north-east end, a large
corner stack with diamond shaped flue, and a side wall stack.
At the north-west end, a shouldered stack with a round flue.
Unbuttressed south-west tower, 3 stages, has string courses
and a band with fleurons below the bell stage. First stage has
to west a flat-headed door with hoodmould, and above it, 2
narrow lancets. South side has a small lean-to projection and
above it, 2 short buttresses. Second stage has a small louvred
lancet opening on 3 sides. Bell stage has rebated corners with
double impost bands and moulded heads topped with round
spires. On each side, a heavily moulded 2-light pointed arch
bell opening under a crocketed gable. Octagonal spire has a
single tier of gabled lucarnes set very high.
Canted north-west porch has a flat-headed doorway to north,
with a pointed arched tympanum. To its right, a shouldered
lancet. Above, 3 small square openings with cusped heads.
Outside, at the west end, a coped retaining wall with plinth,
coping and patterned cast-iron railing, with steps and gateway
to right, and a cast-iron lamp at the left end.
Adjoining Sunday school, forming a cross range at the east
end, has a facing gable with a 4-light pointed arch window,
flanked by single shouldered doorways with cusped overlights.
To its left, a 2-storey range with a lower hipped projection
at the right end, and 2 gable stacks. 5 plain sashes arranged
1:1:2:1. Below, a paired sash flanked to left by a single
sash, then a smaller sash. To right, a door with overlight,
then a single sash. Beyond, a further 2-storey range with a
half-hipped roof and a hipped ridge dormer. Recessed first
floor has tall round-headed windows arranged 1:3:1. Below, a
door with round-headed overlight, flanked to right by 2
round-headed windows.
INTERIOR: main body has a traceried wooden gallery on 3 sides,
with cast-iron piers, octagonal below and round above. Hammer
beam roof with traceried openings. East end has an arch with
round stone piers with rings, flanked by small side arches,
each with a round opening above it.
CJ Innocent, 1839-1901, is particularly noted for his numerous
early Sheffield Board Schools designed 1873-76 in conjunction
with T Brown.
(Researches by G Hague, Sheffield City Council).