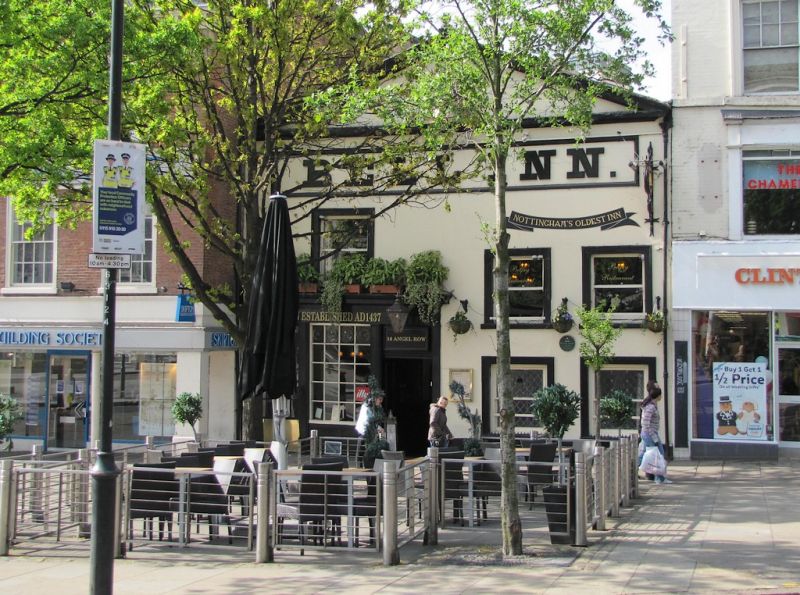 Public house and wine shop. Late C15, refronted c1820, with
mid and late C20 alterations. Timber framing with stucco front
and dressings and hipped concrete tile roof.
2 storeys; 3 window range. Windows are mainly plain sashes
with projecting surrounds. Moulded pediment containing a bell
in relief. Below the pediment, a panel with the name "Bell
Inn" in relief letters. To right, 2 windows on each floor. To
left, a similar window set higher. Below it, a replica early
C19 wooden shopfront with cornice, containing a recessed
glazing bar bow window and to its right, a 4-panel door with
overlight.
INTERIOR has substantial remains of timber framing, with
stop-chamfered ceiling beams and crown post roofs. First floor
room to left has an arch braced truss and stud wall. Vaulted
rock-hewn cellars with rock pillars and brick lined well. Rear
addition has a panelled room c1926 in Tudor style.
This building as been in use as a public house since the mid
C18.
(The Buildings of England: Pevsner N: Nottinghamshire: London:
1979-: 229).