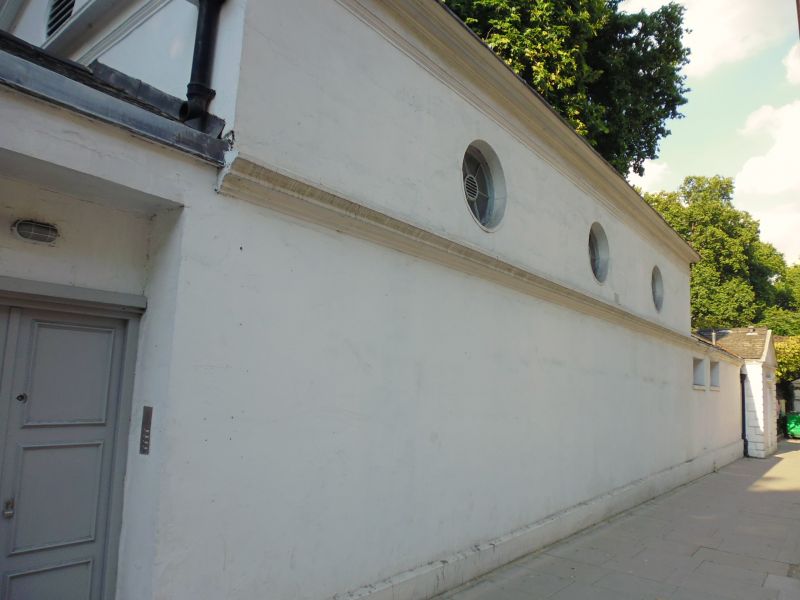 GV
II
The surviving forecourt buildings to the former Foundling Hospital, now Coram's Fields Playground. c1742-53 by Theodore Jacobsen for Captain Thomas Coram; with various later additions and alterations. Reconstructed 1964-8 by G Bryant Hobbs. The only buildings in their original form are the northern sections of the east and west ranges, restored by English Heritage London Division c1988. Stucco and painted brick with slated roofs.

The Band Room in the south-east corner. Single storey, five windows. Round-arched windows with lunettes above. Cornice and blocking course with slated hipped roof. Rebuilt on similar lines to a former mid C19 building. Mary Ward Youth Club in the south-west corner. Two storeys, five windows. Round-arched French doors at ground floor level. Recessed sashes to first floor. Cornice and blocking course with slated hipped roof. Built to balance the Band Room. East and west loggias: two ranges of single storey loggias with Doric columns carrying simplified entablature with bracketed eaves cornices. Slated, pitched roofs. The northern halves of each loggia are open, the southern halves closed in with round-arched French windows. Terminated at the north ends by projecting stucco pavilions with round-arched recesses and openings linked by impost bands and surmounted by a lantern. Projecting central pavilions with three round-arched windows and Doric half-columns supporting entablatures with pediments. Blind oculi in the tympanums formerly with modelled figures and coats of arms.
HISTORICAL NOTE: the Foundling Hospital was built 1742-53 for Captain Thomas Coram and demolished 1926. The memorials and heraldic glass from the former chapel and the statue of Coram from the main entrance were transferred to the new hospital built at Berkhamstead. The former court room, committee room, picture gallery and works of art were retained in the new building at No.40 Brunswick Square (qv).