A Grade I Listed Building in Wembley, London 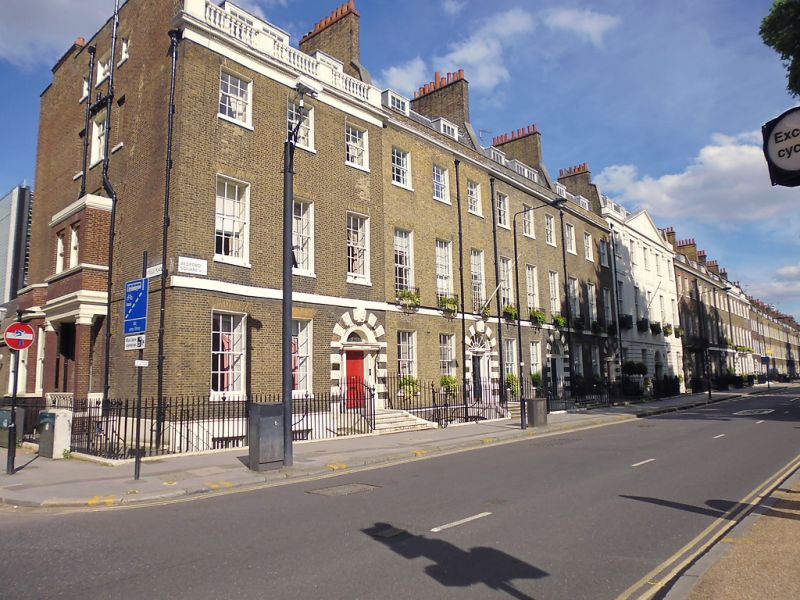 Terrace of 10 houses forming the east side of a square.
1775-1786. All built by W Scott, No.6 with R Grews; Nos 1, 6 &
10 known to have been designed by Thomas Leverton, the
remainder either by Thomas Leverton or Robert Palmer; for the
Bedford Estate. Nos 2-10 form a symmetrical terrace. Yellow
stock brick with evidence on most of the houses of tuck
pointing. Plain stucco band at 1st floor level. The centre
house, No.6, is stuccoed. Slate mansard roofs with dormers and
tall slab chimney-stacks.
EXTERIOR: 3 storeys, attics and basements. 3 windows each
except No.6 with 5 windows. Recessed, round-headed entrances
with Coade stone vermiculated intermittent voussoirs and
bands; mask keystones. Enriched impost bands and cornice-heads
to doors. Side lights to panelled doors, some 2-leaf.
Fanlights, mostly radial patterned. Gauged brick flat arches
to recessed sashes, most with glazing bars. Nos 1 & 5-9 have
cast-iron balconies to 1st floor windows. Cornice and parapet,
Nos 2 & 10 with balustraded parapets.
INTERIORS: not inspected but noted to contain original stone
stairs with cast and wrought-iron balusters of various scroll
designs, decoration and features; special features as
mentioned:
No.1: built for Sir Lionel Lyde, tobacco merchant in the City
and a director of the Bank of England. Central stucco entrance
surround of triumphal arch type with flanking niches
containing wrought-iron crossed arrows, enriched impost bands
which continue to form a cornice to the door, roundels, fluted
frieze with panel and dentil cornice; double panelled doors,
with patterned fanlight, approached by curved steps. Gauged,
reddened brick flat arches to sashes. Dentil cornice and
blocking course with central Coade stone panel of an urn and
arabesque. INTERIOR: of unusual plan with hall the width of
the house with stair to left. Most original features and
decoration in simplified Adam style. 1st floor rear room with
fine plaster ceiling with 7 painted panels of Classical scenes
after Angelica Kauffmann, probably produced by the

mass-production process known as "mechanical painting"
promoted by Matthew Boulton, the Birmingham metalworker; a
form of colour printing finished by hand.
No.2: plaster ceiling with painted panels.
No.3: rear elevation with full height bow. Plaster ceiling.
No.4: plan of interest; stair rises in the middle of the house
between the front and rear rooms.
No.5: rear elevation with full height bow.
No.6: facade possibly by John Mecluer. Rusticated ground
floor; 5 Ionic pilasters rise through the 1st and 2nd storeys
to support a frieze, with roundels above each pilaster, and
pediment with delicate swag and roundel enrichment on
tympanum. At 2nd floor level a continuous enriched band
running behind the pilasters. Originally one house, No.6 was
divided in 1880 when the centre section was raised; restored
to single occupancy 1985. INTERIOR: with good full height
staircase compartment rising through the centre of the house.
No.7: rear elevation with full height bow having cast-iron
balconies to 1st floor windows. David Hartley fire plates
discovered on the 1st and 2nd floors during 1980s restoration.
No.8: rear elevation with full height bow.
No.9: rear elevation with full height bow. 2 plaster ceilings.
No.10: with return to Montague Place. Built for Samuel Lyde,
brother of Sir Lionel. Ground floor with 1 sash and 3-window
bay. 2-window bay at 1st floor. INTERIOR: has staircase rising
between the front and rear rooms. 2 plaster ceilings with
painted panels, one the same as that in No.1.
Some houses with original lead rainwater heads and pipes.
SUBSIDIARY FEATURES: attached cast-iron railings to areas with
urn or torch-flambe finials. No.4 with wrought-iron lamp
bracket and snuffer. Most houses with good wrought-iron foot
scrapers.
HISTORICAL NOTE: the houses in Bedford Square form an
important and complete example of C18 town planning. Built as
a speculation, it is not clear who designed all the houses.
Leverton was a country house architect and may have been
involved with only the grander houses; he lived at No.13.
Palmer was the Bedford Estate surveyor and may be responsible
for the vagaries of the square. The majority of the plots
leased by the estate were taken by Robert Grews, a carpenter,
and William Scott, a brickmaker. No.6 was finished for John
Mecluer, an unknown architect, and later the home of Lord
Eldon, Lord Chancellor (plaque).
Nos 2, 4-6 (consec), 8 and 9 were listed on 14/05/74.
(Survey of London: Vol. V, St Giles-in-the-Fields (Part II):
London: -1914; Byrne A: Bedford Square, An architectural
study: London: -1990).