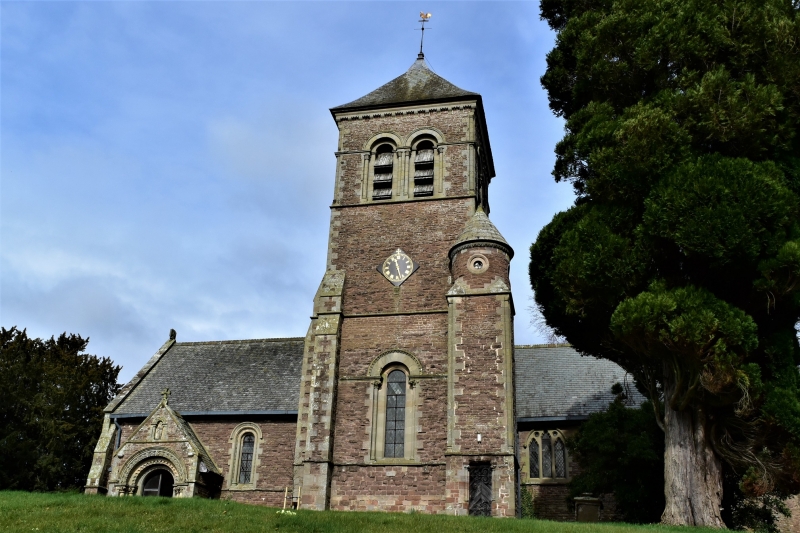 II
Parish Church. 1863-65 by Thomas Nicholson of Hereford, an entire rebuilding of the former C12 and later medieval church in the Transitional Norman and Early English style. Constructed of coursed and dressed local Lower Devonian or Old Red Sandstone with dressings of paler sandstone under a Welsh slate roof. The plan comprises nave, chancel with buttressed apsidal east end and vestry to the north, south porch and a tower with pyramidal roof and incorporating a stair turret to the ringing floor capped with a conical roof.
EXTERIOR: South front of six bays, incorporating south porch, tower and chancel. The porch has a coped gable framing an imposing round arch with bold chevron detailing set on pairs of engaged columns with stiff leaf capitals. Above a string-course there is a niche with round headed arch with chevron detail set on two columns with scalloped capitals. Within the niche there is a small statue, perhaps taken from the old church of the Virgin and Child. Nave of two bays with Early English window tracery. The tower is buttressed to the height of the ringing floor with two tiers of weathering. There is an attractive door at the base of the stair tower with chevron boarding, good decorative hinges and set within a door case flanked by engaged columns with stiff leaf capitals. The belfry has pairs of round headed louvred openings in each face, all with pairs of columns with stiff leaf capitals. At roof level there is a corbel table supported on columns with capitals at each corner. The chancel is of two bays, again with Early English window tracery. The West front has a large round arched window with bold chevron detailing set on two columns with zig-zag detailing with scalloped capitals above. This is flanked by two narrow windows with very heavy chevron detailing, set within two broad buttresses. Above is an oculus in the apex of the nave gable. East end comprises three bay apse, defined by three windows with Early English tracery and four massive buttresses with three tiers of weathering; there is also a corbel table with dog tooth detailing. North side incorporates the vestry to the north of the chancel and a nave of four bays defined by windows of a plainer Norman style.
INTERIOR: Plain plastered interior with timber arched braced roof over the chancel. There is a very bold round headed chancel arch with chevron detailing set on columns with stiff leaf capitals. Beyond there is a good rederos of five round arches forming an arcade. Above there are five flat ribs with chevron pattern with a central boss with a dragon or salamander set on a bed of leaves. There is the C15 font at the base of the tower, very simple and octagonal in form. At the west end there is the new font, which is more ornate, set on a large central column with four lesser columns at the corners, all with stiff leaf capitals. At the base of the chancel arch is the pulpit, again Transitional in style mounted on a cluster of columns with stiff leaf capitals, with the same detailing repeated above. There is some good memorial stained glass in the south chancel windows and above the rederos at the east end.

Numerous parish churches survive in England and a large proportion of these are listed, many at higher grades. They are standing testaments to a deeply held faith expressed in architecture of great beauty and endurance with examples ranging from the medieval, through the gothic 'survival' and neo-classicism of the C17, C18 and early C19, to the great renaissance of church building in the Gothic Revival of the mid and later C19. This last building campaign saw the restoration of many medieval churches and in some cases, as at St. John Pencombe, a complete rebuilding. Undertaken to the designs of Thomas Nicholson, a noted local architect, the Church of St John confidently re-interprets the Transitional Gothic architecture of the old church, which is most articulately expressed in the carved stonework of the south porch, the west end and the chancel arch. The quality of architectural detail and the way this is articulated in the craftsmanship of the masonry confirm it as a work of considerable special architectural and historic interest.