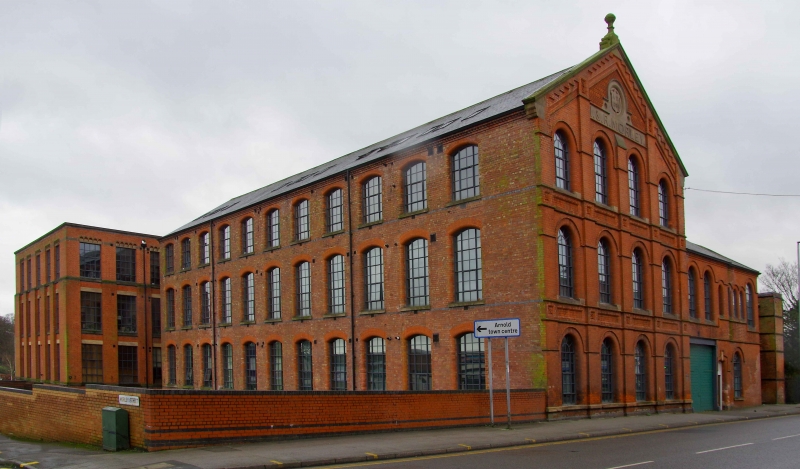 GEDLING MANSFIELD ROAD
SK 54 SE
(East side), Daybrook
6/10007 Former J & R Morley
Hosiery Factory
II
Hosiery factory. c1860, 1885 and 1901. Built for Mr Hardy and extended by J & R Morley.
Three ranges built around a small courtyard. The original south-west range, red brick with blue
brick and ashlar dressings. Slate hipped roof. Ashlar chamfered plinth and moulded first floor
band. Rusticated quoins. Moulded brick cornice. 2 storey, 8 window south front, with 8 glazing
bar sashes and a small inserted doorway to the east, above 8 glazing bar sashes, and above in the
centre a small curved gable containing the factory clock. At the west a truncated square chimney
stack. The 1885, north-west range, red brick with brick and ashlar dressings and a slate roof.
Chamfered plinth and moulded brick cornice. 3 storey plus basement, 11 x 4 bays. West front
has defining pilaster strips, and 3 round headed windows with iron frames, plus linking cill and
hood bands. Above 3 similar windows with decorative panels below and liking hood band.
Above again 3 similar windows, the end ones smaller, with similar decortaive panels and hood
band. Above a wide gable with ashlar coping and kneelers, containing an ashlar panel inscribed
AD 1885, J & R MORLEY. Attached to the south-west a 2 storey link building, with a large
cart entrance with gates and a small office building beyond. A single central round headed
window with to the left a doorway with overlight, above 4 small round headed windows with
2 larger windows to the left and a single to the right. North and south fronts have 3 floors of
segment headed windows with iron frames. The 1901 east range, steel framed with red brick
cladding and concrete dressings. 3 storey plus basement, 13 x 5 bays, with a slightly projecting
centre bay. South front has 5 segment headed basement windows with steel frames. Upper floors
have steel framed windows set back within 5 tall vertical strips. The ground floor has a projecting
concrete cill band, and the second floor a chamfered concrete cill band. All the windows have
plain concrete lintels except the second floor ones which are decorated with a row of 5 round
arches each. The low brick parapet is topped with concrete coping. The central bay rise above
the parapet with a concrete panel inscribed J & R MORLEY and two diamond panels inscribed
19 and 01. The other facades have similar fenestration throughout, though the west, courtyard
facade has a series of taking-in doors to the right of centre.
This is a particularly well preserved group of late Victorian hosiery factories each showing a major
architectural and industrial development of this period.