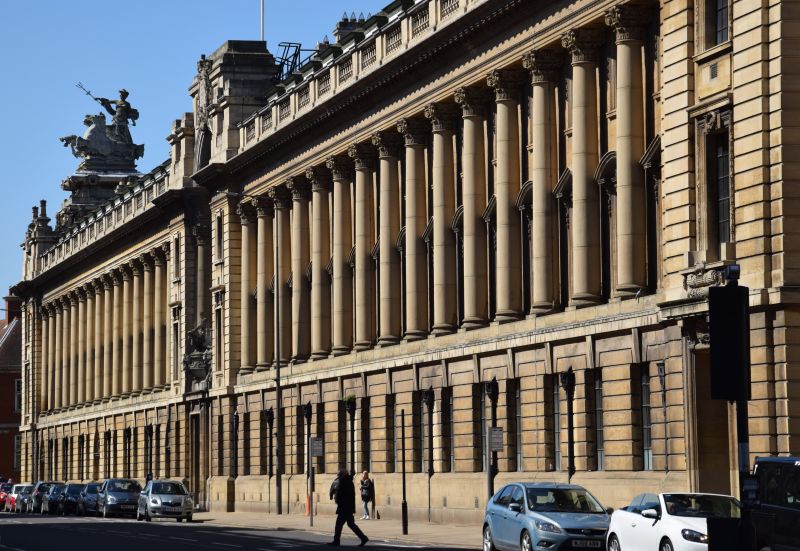 City guildhall, civic offices, and law courts. 1906-1914. By Sir Edwin Cooper of Russell, Cooper & Davis, won in a competition assessed by John Belcher. Built in two stages, beginning with the law courts, by Quibell, Son & Green of Hull. Restored 1948 following wartime damage. Reckoned to be a major work of Cooper.

MATERIALS: ashlar, rusticated, with granite plinth and slate roofs, with numerous coped stacks. Modillion cornice and balustrade to main elevations. Baroque Revival style, described by Pevsner as a tour de force, which it is, inside and out.

EXTERIOR: narrow tapering island site, nine x 33 bays. Two fronts, the main entrance facing east to Lowgate, the much larger Law Courts front facing south to Alfred Gelder Street. Utilitarian rear elevation to north, facing Hanover Square. The Guildhall is set crosswise at the narrow east end, with a plain block of civic offices between it and the Law Courts. These are set lengthwise covering most of the site. The entrance front has a pedimented central portico with paired columns and three windows, set on a basement with three doorways and topped with a square clock tower. This has an arcaded bell stage and stone lantern, plus clock made by Cooke & Johnson for the former town hall built in 1865 (restored by David Stipetic). The lantern is surmounted by four putti supporting a stone cup into which a time ball falls (no longer operational). On each side, symmetrical wings, three storeys, three windows. Returns have single round-arched windows, the left one under a portico. Basements with five windows. Recessed office range, three storeys, has three windows set in rusticated panels, and a basement with three triple windows. Law Courts have a symmetrical front with projecting centre and end bays, the latter topped with massive sculpture groups by A H Hodge. Central entrance bay has a giant arch with paired flanking columns and a hefty sculpture set over the basement door. Flanking ranges, three storeys, 15 bays, have giant columns and pedimented lower windows. Basement has three round-arched doorways. Attics have box dormers. The ornate cast-iron gates to the entrances to the former Police, County and Sessions Courts are by Nelson E Dawson.

INTERIOR: layout reflects the exterior. Guildhall, two storeys, has a spinal corridor flanked by offices, leading to a crosswise passage and stairwell. Elaborate marble double staircase leading to a square reception room and a full-width banqueting hall. The reception room has a coffered ceiling with central skylight. Banqueting hall has half-panelling and a segmental vault with skylight. At each end, a round-arched window. Office block has in the centre the council chamber served by barrel-vaulted corridors and flanked by the civic suite. Council chamber has elaborate coffered dome and cross vaults, and original panelling and fitted furnishings. There are three murals in three of the arches painted by Harry Watson from Scarborough. Civic suite has two panelled reception rooms with coffered ceilings, Renaissance Revival style.

Law courts have a lengthwise segment-arched tiled lobby serving the Stipendiary Magistrates' Court. This and the former Sessions Court have barrel vaults with domed skylights and their original panelling and furnishings. Four smaller courts, divided and altered c1960, have similar furnishings. Panelled Magistrates' room similar to the civic suite.

Time balls were an early C19 invention as an accurate visual time signal to enable mariners and the public to set chronometers and watches. A time ball had been installed at the Royal Observatory in Greenwich in 1833, and in 1852 this was connected to the Electric Telegraph Company, allowing an electrical impulse representing the time signal to be disseminated instantly via the Company’s telegraph network.

At the request of the Corporation, Cooper redesigned the upper stages of the Guildhall clock tower in 1914 to 1915 to include a time ball. The electric time ball cost £75 and was installed by Alexander Shaw of Story Street, Hull. It appears that the time ball was not immediately commissioned due to the First World War and by early 1921 the concept of a time ball was coming under attack due to its cost both in maintenance and the annual Post Office fee to receive the electric signal from Greenwich. The time ball may have operated during a narrow period in 1921 to 1922, but the contract with the Post Office was then cancelled and the motor was removed in late 1922, meaning it no longer functioned. In the late C20 the gilded time ball was replaced in fibreglass after a storm. In 2018 a National Lottery grant was secured to restore the time ball to working order.