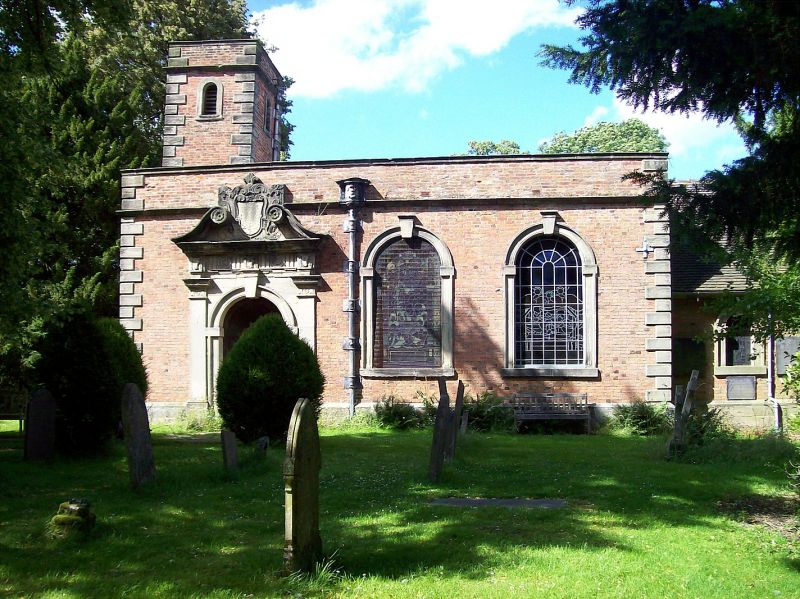 Parish church. 1713, built for William Coke of Trusley Hall,
chancel altered and vestry added c1900. Red brick with
vitrified headers and stone dressings and rusticated quoins.
Plain stone plinth with chamfered copings, moulded stone
stringcourse at eaves level and moulded stone copings to flush
parapets. Leaded nave roof hidden by parapets and steeply
pitched, plain tile chancel roof with stone coped east gable.
Nave roof has small square western bellcote with rusticated
quoins, small raised semi-circular headed louvred bell openings
to all sides and moulded stringcourse and copings to parapets,
also an original lead gutter with hopper head dated 1713 and
decorated with Coke coat of arms. Two bay nave with lower
chancel and north vestry. West elevation has central
semi-circular headed window with staff moulded inner edge,
raised fillet to outer edge, raised impost blocks and keystone
which also has a moulded top. Above is the bellcote. North
elevation has large semi-circular headed central window with
similar detailing to west window. To east is the north vestry,
in similar style to rest of church, with rusticated stone
quoins, semi-circular headed north window and east door, both
with similar detailing to north window. Vestry also has plain
west door. East window and two south nave windows, of similar
design and size as north window. South chancel window of
similar design, but smaller and flanked to either side by
attached stone plaques to the Walker family of 1792, 1815 and
1840. Beyond the two nave windows to west is another original
lead gutter, held on by brackets with embossed plaques of suns
and swans, the crests of the Coke and Balliden families. It
also has an elaborately decorated hopper head dated 1713.
Immediately to the west is the impressive original doorcase with
its original raised and fielded panelled door. It has a large
open swan-necked pediment with central achievement over a
triglyphed frieze with bucranium and circles, and plain
pilasters with harebells and wild strawberry flowers to
capitals. The actual doorcase is of similar design to the
windows, ie: with semi-circular head and with raised imposts and
keystone etc. Interior has low segmental arches into the
chancel and at the west end of nave, across the full width of
the nave. Behind the western one are two projecting walls
supporting the bellcote above. Also to west end of nave is a
C20 organ to north and below the bellcote is the original C18
alabaster font with polygonal stem on scrolled feet, supporting
the circular bowl with oak leaf decoration, also with oak cover.
Adjacent to south by the door is an engraved qlass screen
installed c1970 by the Coke family. The nave roof also has
shields of Coke family on the central bosses of the tie beams.
East end of nave has superb triple decker pulpit with large
octagonal tester. Nave has all its original. raised and fielded
panelled oak box pews and the chancel has its original turned and carved baluster
altar rails. Chancel also has various re-set slabstones to the Coke family to the
south wall; these include one to Franciscus Coke and family of c1639, another with
incised figure of lady with ruff to Briget Curzon of c1638 and one to Guilicum Coke
of cl699. To north side of chancel are two early C19 slate and marble wall memorials,
Nave has nine hatchments, seven of the Coke family dated 1713 to 1841, one to Edward
gilmot of 1748, and one a royal coat of anus inscribed AR. It also has three C18
slate and marble wall memorials, one to Samual Davison of c1770, and the other two
to the Coke family. Two south nave windows have C20 stained glass and east window
as C19 stained glass. Also in the church are fragments of the original altar cloth
and a maidens' garland.