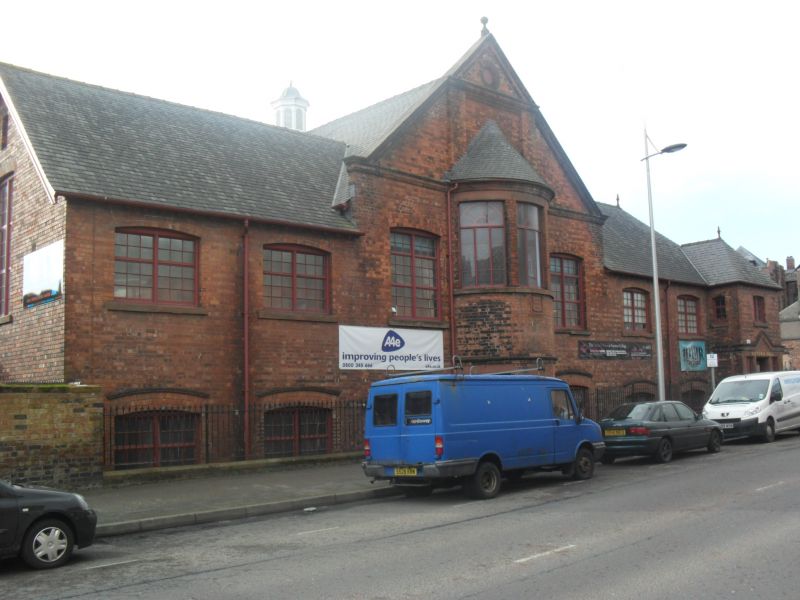 Formerly known as: St Mark's Sunday School RAWLINSON STREET.
Sunday schools and function hall now disused. Dated 1888. By
Paley and Austin of Lancaster. Red brick in English bond with
some red sandstone dressings, graduated slate roofs.
Irregular plan having 2-storey 2:3:2:1-bay facade with wings
to rear-centre and rear-right. Original transomed casements
with glazing bars throughout. Entrance in single-bay
projection on far right has recessed double doors and side
windows under lintel inscribed 'VICTORIA HALL'; moulded brick
cornice pedimented over the door, single window above has
projecting stone sill and cambered arch. The rest of the
facade is symmetrical about a 3-bay gable; ground floor below
pavement level in light-well with railings. Segmentally-arched
ground-floor windows with brick hoodmoulds; similar 1st-floor
windows without hoodmoulds, the windows flanking the centre
being taller.
Central bay has a 2-storey, curved projection with 2
square-headed ground-floor windows beneath drip course; shield
plaque inscribed 'ST MARKS SCHOOLS 1888' beneath 3 first-floor
windows having curved sills and lintels to 3-light casements
with leaded and stained glass including biblical figure;
radially-glazed transom lights. Semi-conical roof on cornice
which carries across to the kneelers of the coped gable; from
this roof rise 2 pilasters which support a triangular pediment
with oculus in tympanum and ball finial. Right end of main
roof and entrance projection are hipped with finials.
Rear: gable of central wing has attic windows on 2 levels and
is abutted by 2 hipped-roof projections. Each side of the main
roof has twin, gabled dormers. INTERIOR not inspected.
Paley and Austin submitted plans for this scheme as early as
1875, various enlargements were passed for which they received
payments in 1881 and 1889 (Cumbria Archives, Barrow).