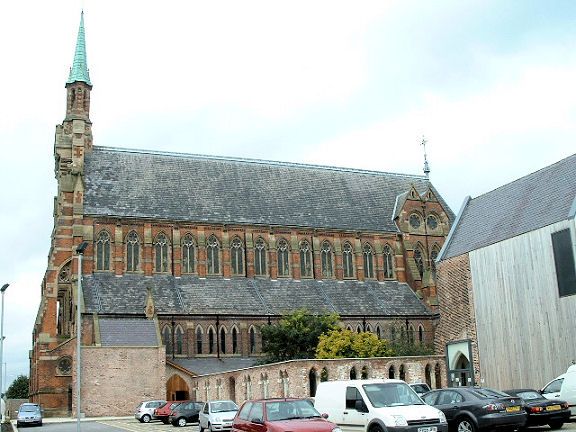 Roman Catholic church, with attached monastic building.
1864-72, by Edward Welby Pugin, for the Order of St Francis. CHURCH:
Red brick with dressings of sandstone and blue brick,
steeply-pitched slate roof. Late C13 Gothic style. Nave on
north-south axis with east and west aisles, south narthex, and
north chancel with polygonal apse. The 13-bay nave and 2-bay
chancel with its apse form a single tall narrow vessel, the
nave having buttresses which form 13 very narrow bays with
corbel tables, the buttresses banded, and each bay containing
a 2-light window with a multifoil in the head; the chancel has
larger but similar windows and unusual coupled dormers with
multifoils; and the apse has 3-light traceried windows with
multifoils in the head. The aisles have buttresses and 3 or 4
lancets to each bay. By contrast with this simple regularity,
the gabled south front makes a very elaborate demonstration of
Gothic features and decoration with strong vertical emphasis:
3 flying buttresses to the full height of the nave, with
polychrome bands and 4 diminishing stone offsets to each, the
outer finished with gablets and corniced octagonal shafts, and
the centre carried up to a large stepped-out and canopied
Crucifixus attached to the front of a stepped pedestal from
which rises a banded and pilastered bellcote with a spirelet.
The bases of the buttresses are pierced by a 4-bay narthex
which has 2-centred arched moulded stone doorways linked by an
impost band carried round the buttresses, and a pierced stone
parapet with a pierced gablet breaking through. Above the
narthex, the nave has 2 very tall elaborately moulded 2-light
windows with geometrical tracery and banded extradoses,
deeply-raked stone sills and hoodmoulds from which rise
pedestals to canopied statues; and the aisles have short
2-centred moulded stone arches each containing 4 small
multifoils.
MONASTIC BUILDING: cloister attached to east side of church,
and returned along front of very plain 3-storey range on north
side of garden, which has small widely-spaced segmental-headed
sashed windows to the 1st and 2nd floors, ridge chimneys, and
a bellcote at the west gable. Unocuppied at time of survey.