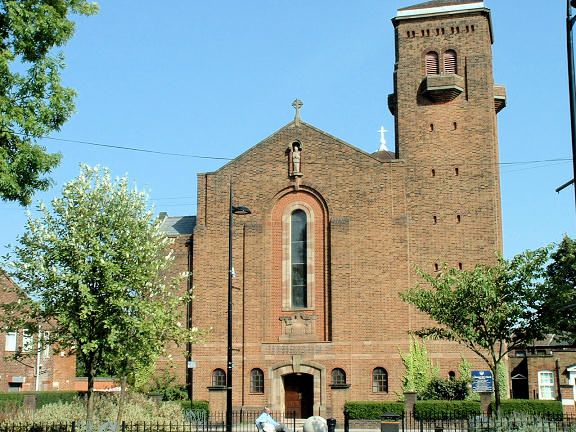 Roman Catholic church. 1937, by E.B.Norris and F.M.Reynolds.
Brown brick in Flemish bond, with red brick dressings and
tiled roofs. Romanesque style. Nave on north-south axis with
low flat-roofed aisles, south-east tower and south-west
transept balancing this, short east and west transepts to low
octagonal crossing tower, apsidal sanctuary flanked by
side-chapels. The high gabled south front, with two pale bands
at a low level, has a segmental-headed doorway in the centre
with stone surround and hoodmould with keystone, flanked by
two low round-headed windows each side. The inner pair of
these are set in pilasters rising to flank a tall round-headed
blank arch which has red brick infill (gauged in the head)
containing a carved stone plaque depicting St Dunstan with
various emblems, and above this a tall round-headed lancet
with stone surround, and a keystone serving as the pedestal to
a niche with a statue. The square tower to the right has a
segmental-headed doorway in the right-hand side (like that at
the front), pairs of very small loop-lights on 5 levels, then
small coupled round-headed belfry windows with unusual
corbelled and canted balconies beneath, an unusual band of
pairs of loop-lights (in place of a Lombard frieze), and a
pyramidal roof. The pilastered 3-bay nave and the transepts
have round-headed lancets with stepped red brick surrounds;
and the crossing tower has an oculus in each cardinal face.
Interior: 3-bay aisle arcades with low plain semi-circular
arches; tall round-headed plain arches to the crossing;
sanctuary with barrel-vaulted ceiling and apse with mosaic
arcading and ceiling depicting the Holy Spirit as dove.
Similar to Church of St Willibrord, North Road, Clayton
(q.v.), also by Reynolds.