35 and 37 King Street and attached railings 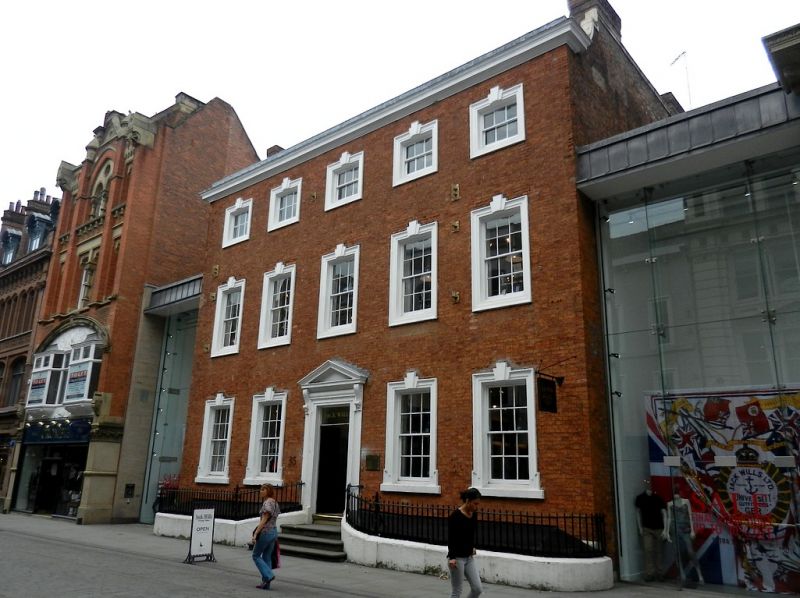 MANCHESTER,
KING STREET (north side),
Nos. 35 and 37 and attached railings

FRONT (south) ELEVATION: the centre block is symmetrical, with stone basement and moulded eaves cornice with blocking course; segmental headed basement windows with triple keystones, and basement area protected by railings on a stone plinth. Central doorway, approached by flight of three steps with pedimented architrave, panelled door and plain overlight. Glazing bar sash windows to all floors, those to the upper floor smaller than those below, all with moulded architraves and triple keystones. Ground floor windows have raised cills. Late C20 wings to either side are substantially glass fronted with slender metal posts and a broad metal fascia which aligns with the cornice of the attached porch to the right. This projects beyond the earlier building line, with pilasters supporting a frieze and a rusticated semi-circular arch below a deep cornice supported on console brackets. The frieze bears the lettering 'BANK'.

INTERIOR: completely remodelled to form shop units, but with compartments respecting the spatial arrangement of the former plan. Original fixtures retained in entrance hall and to front window openings, including doors, plasterwork and window shutters.

HISTORY: the house was built for a Dr Peter Waring, and was used as banking premises from c.1788. Much internal remodelling took place in several major phases, the most recent in the 1990s.

A substantial and finely detailed early C18 town house, which despite internal remodelling retains much early fabric, and which continues to make a major contribution to the richly-varied street scape of central Manchester.